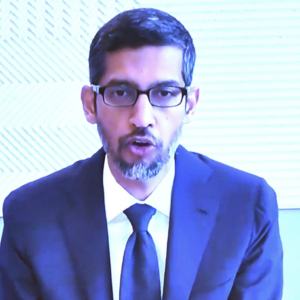 Google CEO Sundar Pichai testifies via the internet to a House Judiciary subcommittee on July 29, 2020
[IS] Opinions

As American Big Tech Faces Heat at Home, the World Watches With Envy

After months of anticipation, the CEOs of Alphabet (Google’s parent company), Amazon, Facebook and Apple (the so-called GAFA firms) were paraded before Congress to offer their views on the state of competition in online markets.

Or, at least, that’s what was supposed to happen.

The hearing itself  proved mostly an excuse for the politicians involved to seek electoral points by taking shots at the CEOs. Watching from Europe, where I work as a scholar of competition law, there was little to cheer about.

After two decades of the rapid technological progress that gave consumers the modern internet search engine, smartphones, online shopping and social networks, the American political and media elite has soured on Silicon Valley. This shift has borne movements to bolster existing antitrust laws and/or adopt ad hoc regulation that would allow policymakers to go after these firms.

The hearing’s primary goal was to discuss how antitrust law, a century-old canon designed to target competition suppressing behavior by monopolists, applies to Big Tech.

Yet most of the questions that were levelled against the CEOs touched upon far broader topics. Political interference by foreign nations, fears about online censorship, alleged anti-conservative bias, the ramifications of targeted advertising and concerns about corporate surveillance all loomed large.

Based on the committee’s confused focus, if these are truly problems, they appear to lie well outside the narrow remit of antitrust law.

So why are many Americans turning against the proverbial geese that have laid so many golden eggs? If the House Judiciary Committee’s hearing was anything to go by, monopoly power does not seem to be the chief concern. To the contrary, most of the ills that were laid at Big Tech’s feet transcend the purely economic sphere.

Unfortunately, this does not bode well for many of the remedies that are being contemplated.

If the problem with Big Tech is not one of excessive market power, then strengthening the antitrust laws, regulating these companies as utilities or even breaking them up will do little to assuage critics’ dissatisfaction. What it may achieve, however, is to jeopardize America’s technological leadership in the world.

If that is the case, the timing could hardly be worse.

The U.S. is currently locked in an increasingly hostile tussle with China — whose tech firms are growing larger and more successful by the day. As if that was not enough, the world is still reeling with the combined effects of Covid-19 and economic recession.

On both fronts, Big Tech has been America’s silver lining. Hamstringing these firms with overbearing regulation may thus be self-defeating.

How the current situation will be resolved is anyone’s guess. Yet it is worth noting that America has been there before — many times.

The U.S. has always entertained a love/hate relationship with its most successful entrepreneurs. Ever since the so-called Robber Barons of the Gilded Age, the American public has a history of turning on its most successful innovators. Standard Oil, AT&T, IBM and Microsoft are just some of the businesses that have been subjected to similar scrutiny. Scholars still debate whether those interventions benefited or harmed consumers.

Looking to the future, the tenor of Big Tech scrutiny may hinge upon the outcome of November’s elections.

While there was criticism from both sides of the political aisle during the hearings, members of America’s two political parties honed in on very different issues. Republicans seemed chiefly concerned with alleged anti-conservative bias, while Democrats were more interested in antimonopoly issues.

Regardless, this will surely not be the final time that these firms are asked to explain their behavior — and their success — to Congress.

Seen from Europe, where much of the opposition to Big Tech comes from an anxiety about the lack of equivalent European tech companies, America’s disenchantment with its most successful businesses is perplexing to say the least.

It is almost impossible to paint a picture where Silicon Valley has been anything but immensely beneficial to America. Big Tech is an American success story that almost every other nation is trying to emulate (with very little success outside of China).

Europe, for all its regulation and competition intervention, is yet to foster a single significant player in the online space. Even Europe’s largest tech firms — notably Spotify and SAP — have revenue and market caps that are vastly smaller than Facebook’s, the smallest of the GAFA firms.

In short, while domestic political demands require careful deliberation, the international implications of Congress’s scrutiny of Big Tech are enormous.

The mounting pressure to “do something” about Big Tech has fostered uncertainty around the industry just as America, and the world, relies upon it the most.

Airing grievances at home is fine, but the impact of reforming an entire body of U.S. law in the name of a grudge against Big Tech will be felt around the world.

Dirk Auer is a Brussels-based senior fellow at the International Center for Law & Economics where he studies antitrust law and digital markets. He wrote this for InsideSources.com.