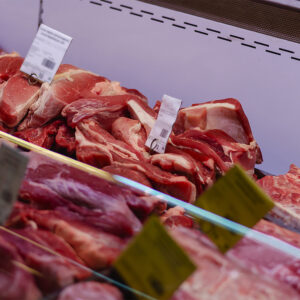 President Joe Biden used his press conference on Wednesday to tell shoppers yet again that the reason for higher meat and poultry prices at the grocery store isn’t his economic policy, but the machinations of “Big Meat.”

Asked about record inflation during his first year in office, Biden replied: “In too many industries, a handful of giant companies dominate the market in sectors like meat processing, railroads, shipping, and other areas.

“We end up with an industry like the meat-processing industry where four big companies dominate the markets, pay ranchers less for the cattle they grow, charge consumers more for beef — hamburger meat, whatever they’re buying. Prices are up,” Biden said.

Biden’s s proposed solution is a $1 billion investment in expanding meat and poultry processing capacity to reduce prices in the meat processing industry.

But is he right about the problem? Farmers who spoke to InsideSources pointed to labor and supply shortages and not, as White House spokesperson Jen Psaki put it, “The greed of meat conglomerates.”

Running a 350 cattle operation in Dublin, Virginia, Jeff Reaves said it is true that large processors are not passing profits to the farmer. Reaves said that has been very apparent in the past 18 months.

“In several cases, the processors were making more per animal than the farmer was getting for the animal,”  Reeves said.

But meat processors do not have much influence on the retail price, Reaves added.

Rising beef prices are a result of supply being restricted due to worker shortages and the prices of feed grains, according to Reaves.

Ernie Birchmeier with the Michigan Farm Bureau said the loss of labor because of expanded unemployment has forced farms and processors to artificially raise wages to attract workers.

While large facilities can absorb these costs, it puts a greater strain on smaller operations especially when the value of the product does not go up, Reaves noted.

“What you had is a plentiful supply of cattle in this country. There was no shortage of cattle, and then you had COVID hit. You had the packers being able to get as many cattle as they wanted when they needed them,” Nissley said. “Then the news media, I blame some of this on the news media, (saying) how bad this is going to be. People hoarded food, whether it was beef or anything else, and (people) cleaned out the meat counters.”

And the labor shortage is not just in the private sector. There is a great need for properly trained federal inspectors and meat cutters — a skill set that is currently lacking, according to Birchmeier.

Lack of skilled meat cutters in Michigan leaves farmers like Monte Bordner on a year-long waitlist for slaughter space at a facility just to sell to his local neighbors.

Biden’s plan allocates $100 million to reduce inspection costs for small processing facilities as well as $375 million for expanding facilities and new construction. According to Birchmeier, dollars help, but it is also important to address other systemic issues.

“A lot of people want to beat up on these large packers for having a monopoly on the market. But if you look back at the past 50 years, part of that has been driven by the federal government’s regulation, environmental regulation, and food safety,” Border said.

Those regulations are expensive and have forced smaller harvesting facilities out of business, Bordner said.

For a mid-sized harvesting facility in southeast Grand Rapids, obtaining a groundwater discharge permit for the purpose of rinse water from the Department of Energy requires a half-million-dollar investment in a water treatment facility.

“The family that owns that has some serious decisions to make,” Bordner said.

While those regulations have been on the books for a while now, a change in administration has shifted levels of enforcement, according to Birchmeier.

Michigan Farm Bureau is currently working with the Department of Energy through the permits and implementing the rules in place.

“It’s kind of a shock to the system,” Birchmeier said. “We’re working with them to make the permitting process for those facilities easier to swallow, and it’s not an easy pill to swallow.”

While environmental regulations have been detrimental to smaller-scale farms and processors, protecting the environment is a priority for farmers.

“Our industry does an outstanding job of protecting the environment because if they don’t, we won’t have a farm to pass on to the next generation,” Birchmeier said.

Elaine Mallon is a freelance writer living in Michigan and a former fellow with the National Journalism Center. She wrote this for InsideSources.com.