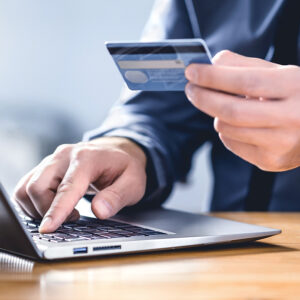 Posted to Politics May 03, 2022 by Michael Quaranta

The pandemic changed our way of life in ways too numerous to count. From how we travel to how we work, there is little in our economy that the coronavirus hasn’t affected.

In the case of e-commerce, the pandemic accelerated already forming trends, like the shift from brick-and-mortar shopping to online retail. But as with any sudden and unexpected change, there are often negative unintended consequences. When it comes to the exponential growth in online shopping, there has been a corresponding increase in the number of counterfeit products.

In 2022, the total value of counterfeit and pirated goods is expected to reach $3 trillion, which is nearly triple what it was in 2013, according to Organisation for Economic Co-operation and Development data.

The increased sales of fake products online have caused retailers to lose a significant part of their profits, and the National Association of Manufacturers estimates counterfeiting has resulted in $22.3 billion in lost income for American workers, 325,542 fewer jobs, $5.6 billion in lost federal tax revenues, and almost $4 billion in lost state and local tax revenue.

During worsening inflation and a struggling economic recovery, the decrease in profits resulting from the sale of counterfeit goods has led to far-reaching economic harms to the retail industry, including employee layoffs, brand damage resulting from the theft of intellectual property, and fewer incentives to innovate since the fruits of that labor may mainly serve the counterfeiters. As is often the case, smaller businesses are being hit the hardest because they do not have the excess capital needed to invest in brand protection measures.

But counterfeiting is not just a problem for businesses who lose out on the revenue that would otherwise be theirs, or the employees whose jobs might be put at risk due to this lost revenue. Components and parts that are created without following the same rules and regulations of an authentic product can create dire health and safety risks. This is especially true for certain industries, like pharmaceuticals and automobiles, where the proper regulations are designed to save lives.

During the course of the pandemic, for example, we saw the rise in fake N95 masks, which is a counterfeit product that could put peoples’ lives at risk.

Thankfully, Congress has a great opportunity to counter the rise in counterfeiting. It could pass the INFORM Consumers Act to deter counterfeiting, which would require online marketplaces to collect, verify and disclose certain information regarding high-volume, third-party sellers of consumer products to inform consumers. This policy would help put an end to the online sale of stolen, counterfeit, and unsafe consumer products by providing law enforcement with the vital tools and information they need to go after criminal counterfeiters.

And while the INFORM Act passed the House as part of the America COMPETES Act, there is still more work to be done in both chambers.

In his State of the Union address, President Joe Biden urged Congress to work together to reconcile the differences between America COMPETES Act in the House and the U.S. Innovation and Competition Act in the Senate to pass a bill that promotes domestic semiconductor manufacturing and improves supply chain resiliency.

It is hoped, as the House and Senate work to come to an agreement, they will include the INFORM Act in the final legislative package, as it will effectively stymie the flow of counterfeit goods, defend American producers and protect the health and safety of consumers.

Michael Quaranta is president of the Delaware State Chamber of Commerce. He wrote this for InsideSources.com.