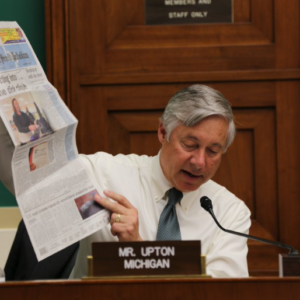 As Homecare Industry Confronts Medicare Cuts, Upton May Be Roadblock to Fix

Medical suppliers are confronting devastating cuts to Medicare reimbursement rates, but despite bicameral and bipartisan efforts in Congress to delay the cuts, it remains unclear whether legislation will pass in the upcoming lame duck session. Sources on Capitol Hill tell InsideSources that outgoing House Energy and Commerce Committee Chairman Fred Upton, R-Mich., is the chief roadblock to passing a bill.

At the heart of the problem is a competitive bidding process for critical home medical equipment and supplies initiated by Congress and the Centers for Medicare and Medicaid Services (CMS). The program was established to set rates using a bidding process for the largest and most densely populated Medicare service areas in the country.

In January, CMS used results from these bidding programs in metro areas to start cutting reimbursement rates in rural communities and, despite the concerns raised by many providers, followed that up in July with another round of cuts. In these two rounds of roughly equal reductions, the Medicare reimbursement rate has been cut by more than 50 percent for many items vs. the 2015 rates, and this has left many businesses struggling to provide care.

Both the House and Senate passed differing versions of legislation to roll back the second set of cuts and give policymakers time to assess the impact of these steep reductions on patients in rural areas, but no bill made it to the president’s desk before Congress recessed in July. During Congress’ short legislative calendar in September, the Senate attempted to pass the House version in a last-minute attempt for a three-month delay to the cuts before the pre-election break. A Senate Democrat placed a hold on the bill before the vote, according to sources, because more time was needed to review other elements of the House legislation.

With a lame duck Congress returning to Washington in mid-November, supporters of the legislation state that Upton now poses the biggest threat to passing the longer-term Senate bill this year. Upton, whose tenure as chairman will end after this session, is focused on passing his 21st Century Cures Act, a bipartisan bill with the goal of accelerating biomedical innovation. While he is not opposed to the Medicare reimbursement fix, Upton doesn’t want any other legislation to interfere with his committee’s focus on 21st Century Cures, sources tell InsideSources. Without Upton’s support, it is unlikely legislation will move until the next Congress.

Many in the homecare industry are worried about the implications of continuing to delay the fix. Tim VanAntwerp, owner of Van’s Medical in Lakeland, Michigan, says his company is now in the red after the second round of cuts in July.

“One of the ways I can stop bleeding is to stop accepting Medicare or by drastically changing the way I’m doing the Medicare business,” says VanAntwerp. “For me, it’s a dilemma because I want to serve the population.” He explains he doesn’t want to compromise the integrity of the brand his family has built over several generations by cutting corners on cheaper products that won’t hold up for patients and hospitals.

VanAntwerp lives in Upton’s district and has known the chairman for 30 years. He tells InsideSources that Upton honored Van’s Medical on the company’s 100th anniversary last year, but VanAntwerp has been disappointed Upton hasn’t done more to fix the Medicare cuts. “He thinks our industry is full of fraud and abuse, and so he hasn’t been one of our supporters.”

VanAntwerp argues that CMS may be claiming it is saving money after the cuts, but the quality of care is being reduced and fewer people are receiving the care they need. “We’re trying to communicate to Congressman Upton that CMS is not only miscommunicating a fact, they’re lying—but perhaps in the politics of today that’s a-ok,” explains VanAntwerp.

Upton’s office did not respond to a request for comment.