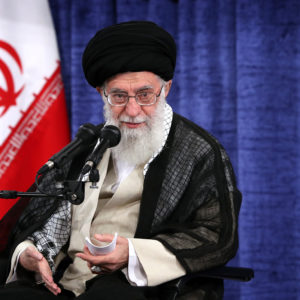 Iran is slowly crumbling from within. In the last two weeks, oil companies in 10 of Iran’s 31 provinces were crippled by strikes involving half of Iran’s contract workers in the energy industry. And a growing number of power outages have been darkening the capital of Tehran and many cities, triggering protests and nightly chants of “Death to Khamenei” and “Death to the dictator” by people fed up with incompetence and corruption.

These eruptions are not isolated. Turnout for national elections last month fell to record lows thanks to a boycott championed by organized opponents of the Supreme Leader Ali Khamenei. In 2019, opponents took to the streets in 200 cities demanding change. One thousand five hundred of the brave protesters paid with their lives.

Not long ago, the story of post-1979 Iran was that religious extremists had taken control of the country and were threatening the West. These days, there is a new reality. Today, the theocrats in charge are losing that control. Their economy is falling. Corruption is rising. And discontent is peaking. It is only a matter of time before the regime is toppled by the people as they reclaim their state.

The boycott of the recent elections demonstrated that the Iranian people are determined to overthrow their medieval rulers and hold democratic elections. The ayatollah’s control is fragile. It will break before too long.

Unfortunately, in the meantime, Khamenei and his next president, Ebrahim Raisi, will crack down further on the long-suffering Iranian people. The dictator and his henchmen have no choice but to resort to such scare tactics and violence to hold onto power.

Raisi has a long history of committing such violence. In 1988, he was part of the cabal that ordered the execution of an estimated 30,000 men, women, and teenagers who were jailed because they dared to disagree publicly with the regime. The United Nations, Amnesty International and a bipartisan group of lawmakers in the U.S. Congress have called for Raisi to be brought to justice for these crimes in front of international tribunals.

The ayatollah’s new vulnerability is both a challenge and an opportunity for the West. Khamenei and Raisi will try to cover their internal weaknesses by stepping up their aggressiveness externally. They have increased their substantial support for proxy terrorist groups in the region. They also are accelerating their development of nuclear weapons despite widespread condemnation.

That makes now the worst time for America to try to mend relations with Iran. Iran’s ruthless rulers cannot be trusted. They also will not be in charge much longer so any deal cut now will be invalid soon. The West would be wise to shun Iran’s rulers rather than give them any credibility. Khamenei and Raisi will be gone from the scene soon enough. Negotiating with them will only postpone the inevitable.

Supporters of a free Iran – including dozens of members of the U.S. Congress – will take part in the global summit this weekend. Their message is that Iran’s people should decide the country’s future, not the authoritarians currently in control. They call for bringing Tehran’s rulers, including Raisi, to justice before international tribunals for crimes against humanity. The Biden administration should follow suit and be even more forceful in condemning Raisi before he is sworn in as president on August 3. Indeed, the West should speak with one voice against the dictates of the ayatollahs and in favor of a secular, non-nuclear, democratically elected republic in Iran.

The Iranian people are ready to decide their own future and the West now has the opportunity to help them do so.

Alireza Jafarzadeh is deputy director of the Washington Office of the National Council of Resistance of Iran. He wrote this for InsideSources.com.