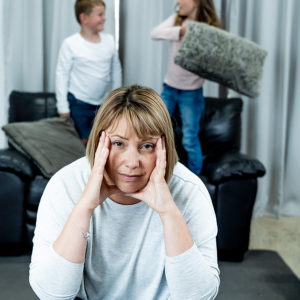 As Many Schools Remain Closed, Families Struggle With Pandemic Blues

Things will get better soon, moms tell each other. But headlines — from Chicago, where the teachers union has adamantly refused to return to work; to Nashua, N.H., where desperate parents are mounting a recall effort to remove pro-union members from the school board — offer little hope schools will reopen.

President Biden’s chief of staff, Ron Klain, appeared to back the union’s anti-reopen stance on Tuesday, saying schools should wait for millions in new federal spending before reopening.

Meanwhile, it’s also clear from the stories parents share that many children are suffering during the pandemic. Not just from isolation, but from six, eight, or even 10 hours a day being spent on screens, and the loss of their school community, their friends and routine.

In Bloomington, Indiana, public schools opened for in-school instruction a month late in the fall, and closed again after Thanksgiving. And even while they were open, there was no before or after-school care, which many working parents need in order to work 9-5 jobs.

Justin Fox and Ashley Grossman had to make a decision. If they were both going to keep working, they needed to transfer their 8-year-old daughter out of her public school to the nearby Catholic School, which, like most Catholic schools around the country, opened on schedule for in-person learning and has remained open for the duration.

“With both parents working, we just needed our youngest to be in school so we could work,” says Fox. “That was the driving decision, for sure.”

In Toronto, schools didn’t open for in-person learning after Christmas break, due to pressure from the unions.

Tatyana Crum moved to Toronto from Indiana in 2018 with her husband and two children, Joseph, age 10 and Solomon, age nine. Online learning has been difficult for them, she says. The boys spend six hours a day in online classes, with only two breaks. And the city is locked down, with fences put up around skating rinks so children can’t even have outdoor winter fun.

“They are not showing it until feeling depressed at night,” she said of her sons. “I put them to sleep and they start talking about how tired they are of everything. It’s so sad.”

She says she’d consider putting her children in a Catholic or Christian school, but in Toronto all the private schools are also closed.

Almost all schools in the District of Columbia and Puerto Rico are closed for in-person instruction as are almost all public schools in California. In New York City, elementary schools reopened for in-person learning this month while middle and high schools have stayed shut.

A mother of a child in a private school in Salt Lake City says children from California, but also New York and New Jersey, have been flooding into her child’s school, and that a bus has been bringing children to the school every day from Park City, about 40 minutes away.

The public school closures have resulted in drops in enrollment numbers of three to five percent in many states as parents switch their kids to private schools, or decide to homeschool.

These closures have also inspired new discussions about schooling, and whether states should allow parents more flexibility in deciding how money for education is spent.

Should the money follow the child, as with school voucher programs? Should families be able to keep education dollars in educational “accounts” so they can use the money for private school but also for tutors and homeschooling?

“We often have too many options with many things, but education isn’t one of them,” New Hampshire mother Shalimar Encarnacion recently wrote on a Facebook page for parents. “We should make it possible for parents to choose what works best for their child.”

Encarnacion said she’s talked to many families who say education accounts, where the parents choose how the money is spent on their child’s education, would be a great help.

“I know families that are paying for private school out of pocket, who don’t qualify for scholarships,” she said recently. “In many instances, any little bit helps and education freedom accounts would go a long way.”