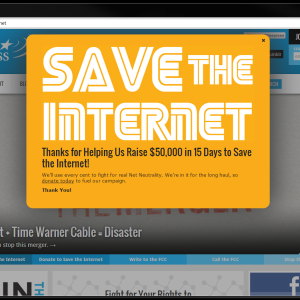 Free Press raises money online to “Save the Internet”

For about a decade, political gridlock and litigation have thwarted the government’s attempts to regulate the Internet in a way that preserves the openness that has made it such a revolutionary force. But with a federal appeals court’s ruling this winter that defined the limits of the government’s authority, the long-running battle between two major forces — advocates of vigorous government intervention and those supporting a light regulatory approach – appeared be to drawing to a close.

Yet the fight continues, even as Tom Wheeler, the chairman of the Federal Communications Commission (FCC), moves ahead with proposed regulations that seek to maintain an open Internet within the confines of the ruling. And much of the backlash is coming from two obscure advocacy groups – Free Press and Public Knowledge — that appear to have a major financial stake in the drawn-out battle over this narrow issue.

Indeed, the debate appears to have served as a powerful fundraising tool for these groups, according to a review of their tax statements. Consider 2010, the last time a pitched debate erupted over the issue. Revenues for Public Knowledge spiked nearly 200 percent (about $1.4 million) from the previous year, while Free Press saw its revenues climb by about $700,000 over the same time period. 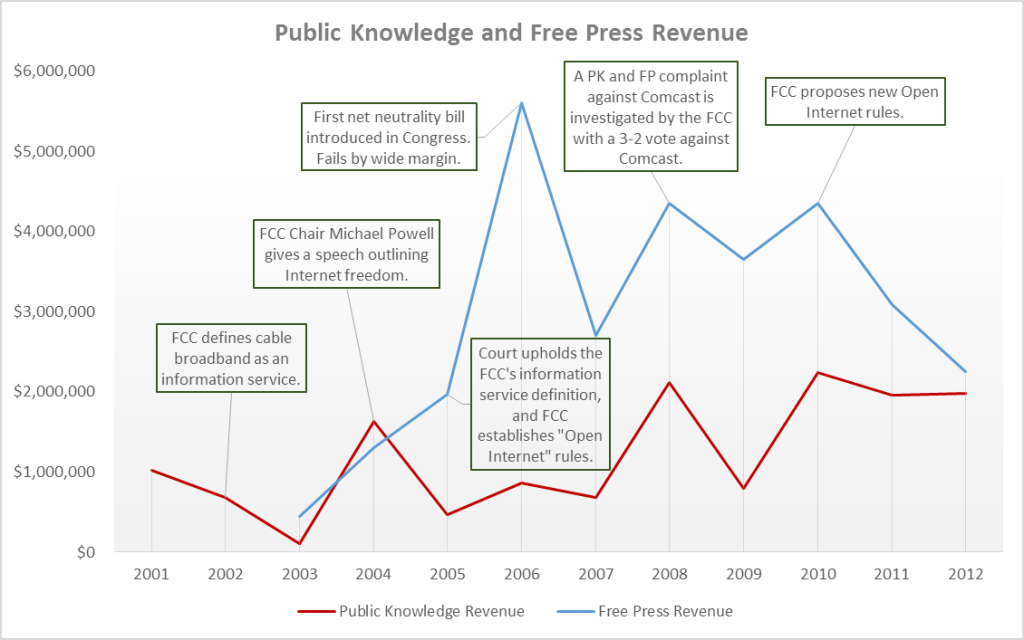 In that context, critics say an abrupt end to this long-running fight may well diminish the influence of the two groups, if not render them completely irrelevant.

“Free Press has made a living for a decade now telling the same scare stories about big bad phone and cable companies poised to destroy the Internet if government doesn’t step in immediately,” said Phil Kerpen, the president of American Commitment, a free-market advocacy group, and chairman of the Free Internet Coalition, a group that advocates limiting government regulation and taxation of the Internet.

“They’ve been proven wrong every day for a decade,” he continued.  “But the beat goes on. They will not be satisfied unless and until, in the words of their founder, they achieve their goal: ‘to get rid of the media capitalists in the phone and cable companies and to divest them from control.’”

Kerpen said that his critique equally applies to Public Knowledge, noting that there is little difference between groups on the issues and that they work closely together.

The extensive efforts undertaken by these groups to keep the issue alive will be on display on Monday when Lauren Wilson, a Free Press member who drew criticism for a racially-charged tweet directed at FCC commissioner Ajit Pai, is scheduled to give an address at the National Press Club in Washington tying net neutrality to media freedom and the broader public interest.

In many respects, the experiences of Free Press and Public Knowledge serve as case studies for the growing advocacy industry in Washington, where groups committed to causes constantly spring up, only to fade away once the debate over their particular issue ends. In this case, however, Free Press and Public Knowledge seem reluctant to go. In fact, the groups have for years been warning that without vigorous government regulation, corporate giants would seize control of the Internet, something that shows no signs of happening.

The debate itself involves so-called net neutrality, the concept that essentially seeks equal access to the Internet for all content and material. Groups like Free Press and Public Knowledge argue that without strict government oversight and enforcement, Internet service providers like AT&T, Comcast and Verizon will be free to discriminate and charge different rates for different content providers, all to the detriment of an open Internet.

In a sign of how deeply dug in interest groups have become, Free Press held a rally outside the offices of the Federal Communications Commission in Washington last month, when the Commission began public consideration of Mr. Wheeler’s open Internet proposal.

Mr. Wheeler’s proposal seeks to prohibit Internet providers from deliberately slowing data, an obvious form of online discrimination. But the plan also contains a provision that groups like Free Press and Public Knowledge have seized upon to rally their supporters. The provision would allow Internet-service providers to charge companies like Netflix and Google a fee in exchange for prioritizing the delivery of their content.

Free Press and Public Knowledge argue that the prioritization model would essentially result in discrimination against some content. The groups are pushing for strict government oversight: that the Internet be regulated as a public utility. This would designate the Internet as “common carriage” under Title II of the Telecommunications Act, though it would actually still not end the debate over paid prioritization.

But telecommunications industry experts point out that Mr. Wheeler’s proposal falls within the confines of the court ruling earlier this year, which provided him with the authority to protect against any threat to an open Internet. More than that, they note that the Internet has flourished without onerous government regulation and warn that such regulation would stifle the investments and innovation that have made the Internet an engine of innovation.

Critics of Free Press and Public Knowledge say their objections are nothing more than the final gasps of groups whose raison d’être vanishes with a conclusion of the decade-long debate over net neutrality that has consumed Washington.

While both organizations started small, with only one or two professional staff, they have since expanded greatly.  And as their top wage earners have become fixtures in the Washington advocacy circuit, these political activists have become reliant on their organizations for increasingly sizable pay. When both organizations launched, only a small portion of their budgets went to cover employee compensation. But since then, each organization continues paying out more and more to staff.

In fact, both Free Press and Public Knowledge have frequently paid out more to their staffs than their organizations have brought in.

Multiple requests for comment were made to Free Press and Public Knowledge over the course of several days. Neither organization responded to questions about the importance of the net neutrality debate to their fundraising efforts.

Nor did the organizations respond to the critique that an increasing share of their revenues are paid out to their professional staff and political organizers. 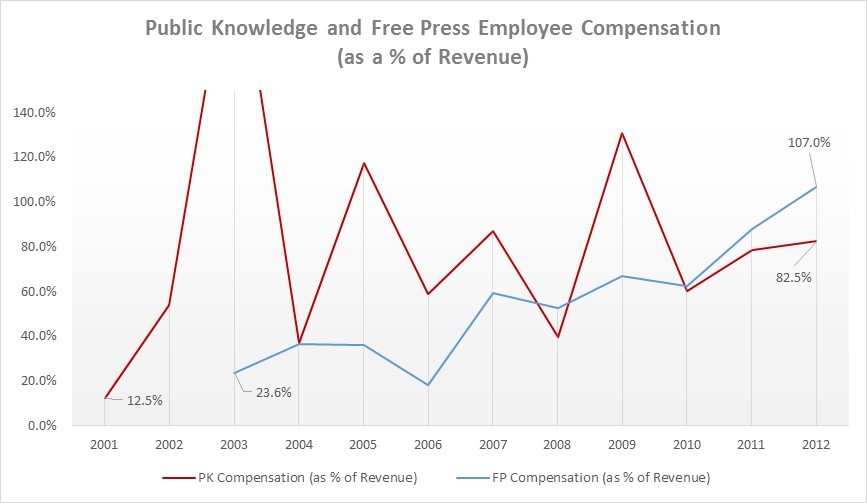 As the organizations have matured, a far greater portion of each group’s revenue, and sometimes more than their total revenue, has gone to supporting the professional staff and organizers that make a living off of the debate’s continued relevance. 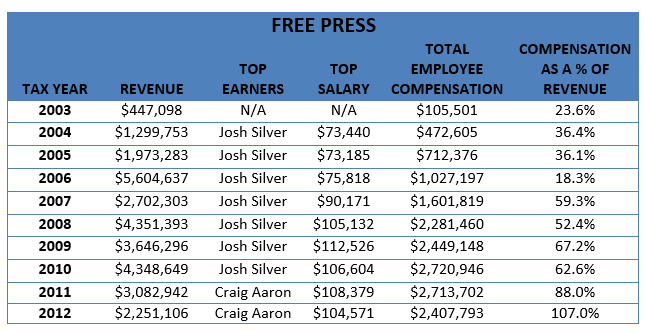 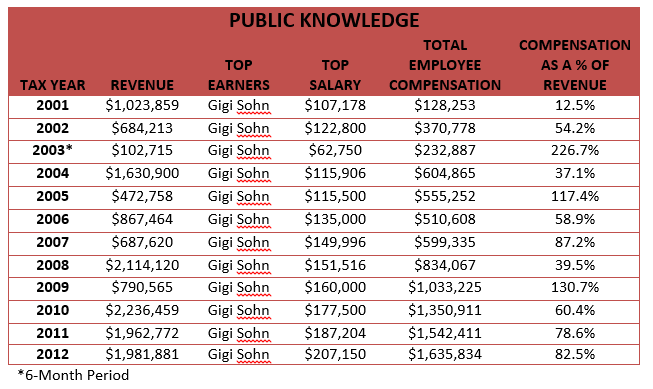