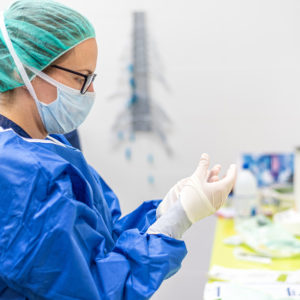 Employees are working weeks without a break at some American companies. Others are literally living in their factory to help create materials needed for PPE production. At the corporate level, a coalition of U.S. businesses has joined forces to fight against the distribution of counterfeit PPE that could mean life or death for medical workers or their patients.

It’s all a reminder that — while Americans may be divided politically — they’re still ready to work together to fight the spread of the coronavirus.

The nation’s top emergency official warned Congress last week that the recent spike in demand in states like California and Texas could cause “micro-shortages,” a problem exacerbated by the fact that most PPE is produced abroad in China and Vietnam. “It’s a national security issue,” Federal Emergency Management Agency (FEMA) Administrator Pete Gaynor told the House Committee on Homeland Security.

As of last week, the federal government has delivered to private and public sector workers 81 million N95 respirators, 746 million surgical masks, 329 million surgical gowns and 19 billion gloves, Gaynor said. But it still may not be enough.

And so Lydall — a leading U.S. manufacturer of value-added engineered materials and specialty filtration solutions — just broke ground on a new factory in Rochester, N.H., with the capacity to support the production of 140 million N95 respirators, or 540 million surgical masks, every month.

Braskem America is the largest producer of polypropylene in the Americas. When the COVID-19 crisis first broke and PPE was scarce, more than 80 workers at their plants in West Virginia and Pennsylvania volunteered for the “live-ins” to produce this polymer used in medical gowns, disinfectant wipes and face masks.

Braskem America, which has a plant in Marcus Hook, in Delaware County outside Philadelphia, organized its live-in rotation to “help ensure the health and safety of our team members who are working as an essential service throughout this crisis to keep these key supply lines running,” according to a company press release.

In New York City, the Brooklyn Navy Yard is partnering with its vendors to produce and sell “Yard-Made” PPE.

The “Made at the Yard” initiative is designed to help yard tenants sell PPE, such as cloth face masks and hand sanitizer, directly to consumers through a variety of channels. These include vending machines inside — and stores adjacent to — the shipping yard.

The “Made in” labels are becoming more crucial as federal and state governments seek to eliminate counterfeit PPE and equipment that doesn’t meet quality standards.

The U.N. recently reported that criminal organizations are exploiting the need for PPE. Some are taking payment of PPE orders they never intend to fill, while others are selling substandard equipment. In response, a coalition of private and public partners have launched a campaign to fight back.

“COVID-19 has mutated criminality to a higher level of danger as corrupt regimes and criminals enrich themselves through an illicit trade pandemic that puts the health and safety of all citizens and communities at risk, such as fake medicines and counterfeited medical equipment and supplies,” said David M. Luna, president and CEO of Luna Global Network, a member of the wide-ranging coalition led by Philip Morris International.

The CEO of Lydall talked about the fraud issue during her company’s groundbreaking in New Hampshire.

“There are many masks being tested as they are coming into the country that aren’t meeting the standards, which is just reinforcing why we need to make sure that we have a supply chain that we can trust because the media that Lydall makes and the mask makers we sell to all comply with the highest regulations that exist,” Sara Greenstein told InsideSources.

Greenstein also recognized the sacrifice of Lydall’s employees who worked 60 straight days with no time off to produce meltblown filtration media, which makes up the linings for N95 respirators and surgical masks.

Even with the additional efforts, this isn’t a problem America will solve overnight.

“This isn’t as simple as throwing on a light switch and we just magically make more. We still have many months to go before we start making enough in the U.S. to supply the demand,” Gaynor said.

“We’re in a much better place than we were coming out of March and April. However, we are not out of the woods completely with PPE.”