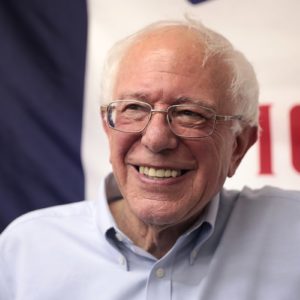 He may unsettle the editors of the New York Times. He might worry swing-district Democrats walking the halls of Congress. And he can absolutely spark a cable-TV conniption fit from James Carville.

But if you ask the average Democrat, they’ll tell you they like Bernie Sanders just fine. In fact, better than fine. This shouldn’t be a surprise given Sanders got the most votes in Iowa and New Hampshire and he’s widely expected to win Nevada on Saturday. According to Politico, Sanders’ opponents have conceded his coming victory in the Silver State and are battling for second place.

So why does the media coverage of Sanders often sound like he’s a longshot at best to become the Democrats’ nominee? Perhaps some in the media should read their own polls.

A new USA Today/Ipsos poll asks Americans whose character they admire most among the candidates for president. The top pick among Democrats: Senator Sanders. Sixty-five percent said they admired his character — 11 points higher than his closest rival, Joe Biden. Warren’s character was admired by 53 percent of Democrats while Michael Bloomberg trailed the pack at 46 percent.

The media’s horse-race coverage of the campaign makes it’s easy to overlook an important, fundamental fact: Democratic primary voters like all of their major candidates (assuming you don’t consider Tulsi Gabbard “major”) — and their desire to defeat Donald Trump is far greater than their preference for any specific candidate.

At the same time, it’s noteworthy that Sanders has long been one of the most popular candidates in the race, with an approval rating that’s consistently above 70 percent among Democratic primary voters. The latest Morning Consult poll, for example, gives Sanders a 74 percent approval and 21 percent disapproval rating, for a net +53 percent rating.

Compare that to Biden’s net +43 and Warren’s +41 and Sander’s recent win streak is hardly surprising. Other polls have slightly different numbers — Warren’s one-point more popular than Sanders in the new Economist/YouGov poll, for example — but the overall trend is the same.

Lesser-known candidates like Pete Buttigieg and Sen. Amy Klobuchar have lower numbers but they also have far lower name ID. Forty-one percent of Democratic primary voters say they either haven’t heard of Klobuchar or don’t know enough to form an opinion.

But Democrats do know Sanders, have known him for years and they still like him. (The same cannot be said of Hillary Clinton, alas.)

One reason for their affection is they believe Sanders likes them, or at least cares about people like them. In the new Ipsos poll, Sanders gets the highest marks of any Democrat on the question “he cares about people like me.” And not just with his fellow Democrats, but among voters as a whole. In fact, among suburban women — a key voting bloc in the upcoming election — Sanders is seen as more empathetic than Liz Warren.

That fact alone may explain why Sanders looks like a lock in Nevada while Warren’s campaign is on life support.

Warren’s allies have tried to fight back by attacking Sanders as ineffective. “I’m confounded why some people think it’s compelling to say that they are consistently fighting for the exact same thing for 30 years. When the end of that sentence is ‘and losing,’” says Adam Green of the pro-Warren group, Progressive Change Campaign Committee. “I would just say to most Bernie Sanders voters, if you agree with his values, your best bet to actually get them done is Elizabeth Warren.”

Based on the latest polls, the attacks aren’t working.

On Tuesday, Marist released a new poll showing Sanders at 31 percent among Democrats nationwide, with a double-digit lead over his nearest contender. He’s led in five of the six most recent national polls tracked by RealClearPolitics, giving him a six-point lead in the RCP average.

There’s simply no debate: Bernie Sanders is the Democrats’ frontrunner. And to those pundits who insist he’s flawed frontrunner with limited appeal, former Bill Clinton strategist Mark Penn notes: “He’s a stronger frontrunner today than Joe Biden was for the past year.”

And while it may drive the cable news class crazy, Democratic primary voters are just fine with that.