On Tuesday, the ride-sharing service Uber sent an email to its customers in Illinois praising Illinois Democratic Governor Pat Quinn for vetoing a bill that emerged from the state legislature threatening Uber’s business.

The email was no doubt well timed for Quinn. On Monday, Vice President Joe Biden spent an entire day in Chicago to aid Quinn, who is in a close reelection fight with Republican Bruce Rauner. Biden’s itinerary included attending a $15,000 per plate dinner to raise money for Quinn.

Recent polling shows Quinn with an uphill battle. Rauner has a lead of several points.

Political strategists view the Uber email as helpful to Quinn because of its wide reach in Chicago and the company’s popularity with young voters. Uber declined a request by InsideSources to reveal how many people had received the email.

Rauner had been calling for Quinn to veto the bill for several weeks.

Uber’s praise for Quinn follows the announcement last week that former Obama campaign manager David Plouffe was being named Uber’s “Campaign Manager.”  A number of leading Democrats have been praising Uber for hiring Plouffe. And even the conservative Wall Street Journal editorial board expressed optimism that Plouffe would be helping to push an anti-regulatory message.

Plouffe’s role at Uber is to oversee its policy, branding, and strategic communications.

InsideSources spoke with Uber about the email. Spokeswoman Lauren Altmin pointed out the company had blogged and tweeted in support of Quinn also. She declined to respond to questions regarding Plouffe’s role and whether the company had previously made similar efforts to praise other politicians.

Republicans had been hoping to make in-roads with Uber’s young clientele. The Republican National Committee has been vocal in supporting Uber with free-market messaging. The committee launched a petition earlier this month in support of Uber in its battle with “taxi unions and liberal government bureaucrats.” RNC Chairman Reince Priebus praised Quinn’s veto.

Rauner campaign spokesman Mike Schrimpf issued a statement to InsideSources: “One month after Bruce urged Governor Quinn to veto the anti-ridesharing legislation Pat Quinn finally did the right thing. Illinoisans will have never to doubt that Bruce Rauner will stand up for jobs and innovation.”

The email from Uber is below. 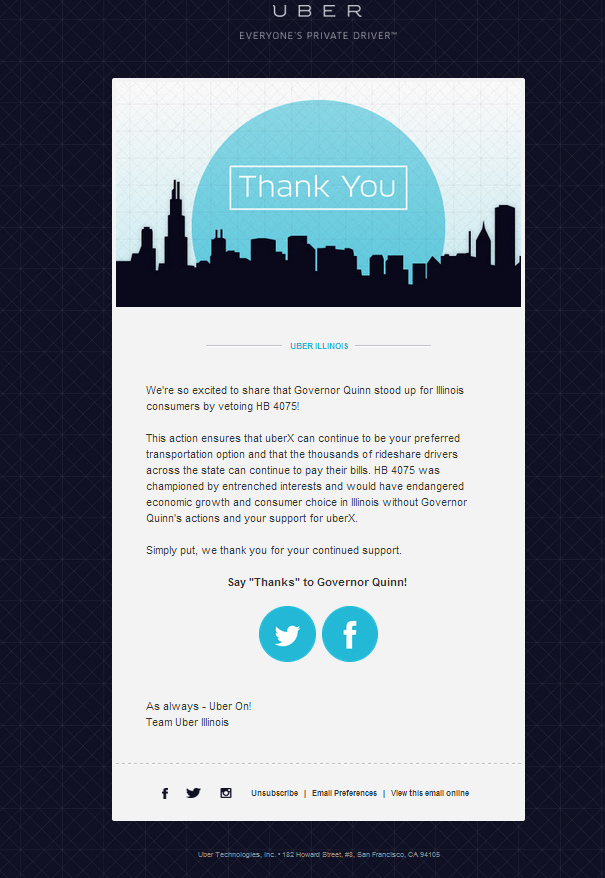