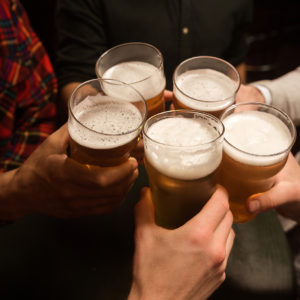 As Restaurants Struggle, Some States Ask: Why is Happy Hour Still Banned?

Though unity seems hard to come by these days, the people of Massachusetts are in agreement on one thing: They want their happy hour back. And years of nationwide motorist data might be on their side.

A well-known feature of many bars and saloons, happy hour has been outlawed in Massachusetts since 1984, one of 11 states to ban the popular promotion. (Alaska, Delaware, Hawaii, Indiana, Maine, North Carolina, Oklahoma, Rhode Island, Utah, and Vermont are the others.)

The Bay State passed the legislation in response to a string of drunk driving fatalities there. It prohibits bar owners from selling drinks “at a price less than the price regularly charged for such drinks,” among other restrictions.

But the loosening of liquor laws to help restaurants stay alive during the pandemic, including allowing to-go sales of mixed drinks, has caused both politicians and the public to rethink some alcohol restrictions. A recent poll from nonprofit think tank MassInc found 70 percent of Massachusetts citizens support the return of after-work drink specials. The strong showing prompted state Rep. Mike Connelly to introduce a bill to repeal the law last month.

The legislation, which touts itself as “an Act providing for immediate and long-term relief for restaurants and bars in response to the COVID-19 pandemic,” has not yet been written. Its passage would not guarantee a reinstitution of happy hour; Connelly said on Twitter the measure would “bring stakeholders together to revisit the state’s ban on Happy Hour.”

Massachusetts Gov. Charles Baker, meanwhile, has already signaled his opposition to the law even before the legislation’s text has been written.

The happy hour ban “did not come about by accident,” Baker said during a recent press conference. “It came about because there was a sustained series of tragedies that involved both young and older people in some terrible highway incidents, all of which trackback to people who had been over-served as a result of happy hours in a variety of places.”

But do happy hour bans actually make a difference in lowering drunk driving cases and fatalities? The data offer less support for that than advocates might like.

Though the percentage of alcohol-related fatalities in Massachusetts has indeed trended downward since 1982, further analysis shows that its happy hour ban may have had little to do with that drop.

According to statistics gathered by the National Highway Traffic Safety Administration, alcohol-impaired driving fatality rates aren’t universally higher in states where businesses can offer drink specials. Alaska, which outlaws happy hour, records one of the highest fatality rates calculated by the Administration, at 0.52 per 100 million vehicle miles traveled in 2018.

The numbers are similarly inconclusive in other states. North Carolina, which outlaws happy hour, has a rate of 0.32 while neighboring Virginia—which allows it—has a rate of 0.28. New Jersey and Minnesota rank last and second to last in the data; happy hour is legal in both states. (Massachusetts, it’s worth noting, also sits near the bottom of the list.)

Experts have not placed major emphasis on happy hour bans for keeping drunk driving deaths low. Further analysis by the NHTS credited several types of laws passed by state legislatures for a drop in drunk driving deaths from 1982 – 2005. Those laws included blood alcohol concentration cutoffs, licensure suspensions for those who fail BAC tests, and “zero tolerance” laws for underage drinking and driving. None of the highlighted laws involved prohibitions on happy hour service.

The U.S. Centers for Disease Control and Prevention, meanwhile, noted last year that Massachusetts sits above the national average for motorists who self-report driving after consuming too much alcohol, a potential indicator that the law has had little effect in the nearly four decades that it has been in effect. In a list of “strategies” for “reducing or preventing alcohol-impaired driving,” the CDC also does not name happy hour laws.

Restaurant owners who have suffered so much during the COVID-19 lockdowns are hoping legislators will “follow the science” on happy hour legislation, too. “We are all suffering very much, and at this present time, anything (the government) can do will help us,” Massachusetts restaurant owner Donato Frattaroli told the Boston Herald. “That is a great idea to bring it back.”

Gov. Baker, meanwhile, has not shown any willingness to sign off on any happy hour repeal. “I’d be hard-pressed to support changing it,” he said.

Abigail Sitterley is a writer and reporter in Rochester, N.Y. She wrote this for InsideSources.