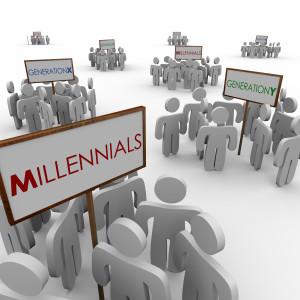 As the Largest Share of the Labor Force, Millennials Could Shape Workplace Policies

The Millennial generation of Americans ages 18 to 34 achieved a major milestone this year, overtaking the slightly older Generation X as the largest share of the nation’s workforce, according to a Pew Research Center report released Monday.

Richard Fry, the Pew researcher who authored the report, told InsideSources that many members of Gen X have left the workplace as a result of the weak economy, although it’s conceivable that they could return if job prospects improve.

In the meantime, Fry expects the 53.5 million Millennials who now make up more than a third of the workforce to experience their own employment challenges, particularly the young women who will wrestle with work-family trade-offs if and when they decide to have children.

But Millennial women may yet shape the American workplace in ways their mothers and grandmothers never did, according to Kim Parker, Pew’s director of social trends research. Women under 35 are more educated than men their age, and they’ve nearly achieved parity in terms of wages. Should many of these women decide to continue their careers once they start families, “there might be a groundswell of support for more flexible workplace policies for this generation,” Parker said.

A cultural shift of this kind would undoubtedly please Young Invincibles, an influential progressive advocacy group in Washington, D.C., that seeks to give Millennials a voice in public policy debates.

Young Invincibles supports proposed legislation requiring employers to provide workers with advanced notice if their schedules are going to change. The group also backs a bipartisan bill giving tax credits to employers who start or significantly expand apprenticeship programs, many of which disproportionately benefit young people. “We think that’s one great solution to help more young people get the skills that are needed in today’s workforce,” Lovenheim said.

But there are some Millennials in Washington who offer their generation a different public policy prescription. Young conservatives at the advocacy group Generation Opportunity argue that government programs intended to aid young people actually create roadblocks for them, including with regard to the cost of college.

“Artificially lowering interest rates on student loans increases the already unaffordable price of college tuition, and the Department of Education’s continued monopoly on accreditation has limited healthy competition and innovation in the higher education marketplace,” Luke Kenworthy, a spokesperson for the group said in a statement to InsideSources. Kenworthy also expressed opposition to a proposed online sales tax, saying it would hurt the ability of Millennials to start new businesses.

For now, conservatives courting young people are up against the reality that Millennials have been reliable Democratic voters who support progressive policies, but a generation’s political attitudes can certainly change over time.

With regard to the attitudes of Millennials in the workplace, Pew’s Kim Parker said she and her colleagues look forward to researching subjects they’ve never studied in depth, including what attributes today’s young people value most in a job.

“We definitely want to look at that,” she said. “The workplace is changing, and Millennials are going to have a big impact on how that goes.”