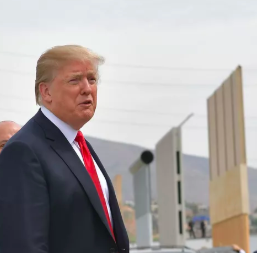 As Trump Doubles Down on Border Wall, Eminent Domain Abuse Is Inevitable

For nearly five years, President Trump has inspired rage and fanfare for his bold border defense tactic: “I will build a great, great wall on our southern border.” His ambitious goal for 2020 is to bring the fortification’s length to 450 miles. If he’s successful, he will have walled almost a quarter of the U.S.-Mexico border.

It’s clear that Trump wants to make good on his promise, particularly as he seeks re-election in November. But as he faces more and more pushback in his pursuit, he’s become all too willing to wield a shameful tool: eminent domain.

Eminent domain allows the federal government to seize private property for public use, and its practice in the United States is long and storied. Though the Fifth Amendment requires “just compensation” in exchange for land, that stipulation is often manipulated and pushed to its limits. Landowners are often intimidated into simply accepting the government’s offer. If they don’t, their land may be condemned and seized.

Unfortunately for Trump, his endeavor is far from clean-cut: private property comprises two-thirds of the border’s nearly-2,000 mile stretch. As Trump’s overconfidence comes to blows with the complicated reality of the border, he’s grown increasingly feverish in his land grabs.

And we should be worried.

Yuliya Panfil, director of the Thomson Reuters Foundation’s Future of Property Rights program, says, “Generally there’s a history of getting undercompensated, and it really splits along economic and racial lines, where the vulnerable get less compensation.”

In Texas, wealthy residents have historically faced no such difficulty: Rollins M. Koppel, for instance, hired a firm that brought his initial offer of $233,000 to $5 million back in 2007. Poor residents, on the other hand, tend to take whatever appraisal they get, lest they incur massive legal fees.

Regarding the continuing eminent domain battles in the Rio Grande Valley, Texas Civil Rights Project lawyer Ricky Garza observes a “severe use of government power against people who have very little.” For one of the poorest parts of the United States, eminent domain is truly a goliath.

But it goes further. Another eminent domain tool, called “quick take,” forces landowners to duke out compensation deals in court, all while construction takes place non-consensually on their property. As blatantly unconstitutional as this would seem, the Supreme Court has deemed the process legal, assuming that the landowner is compensated eventually (key word being “eventually”).

In 2017, 10 years after construction on the comparatively-modest border fence began, many Texan landowners were still involved in lawsuits over land payments. “Quick take” hasn’t been challenged since Rep. Justin Amash introduced the Eminent Domain Just Compensation Act last year. But the bill saw no progress, and this appalling tool remains in Trump’s hands.

Trump is hardly the first president to employ eminent domain at the U.S.-Mexico border. Under President George W. Bush, the Secure Fence Act of 2006 drove the federal government to lay claim to properties along the Rio Grande in Texas, ultimately leading to the construction of 50 miles of fencing on formerly private land.

A total of 360 eminent domain lawsuits were filed against property owners along the border. The federal government repeatedly bungled the seizure process in Texas, paying residents inadequately and condemning properties prematurely.

As Trump adds a new, misguided chapter to the story of the U.S.-Mexico border, locals have proven largely unwilling to play his game. While some landowners in Texas have agreed to comply with the federal construction effort, others have sworn to resist until they can’t anymore.

It’s all part of a greater trend — as of last year, nearly two-thirds of Americans opposed the wall. And perhaps nothing speaks louder than the fact that every congressperson from a border district voted to block border wall funding in 2019. Even so, the Trump administration has proven foolishly committed to seeing the project through to its end.

Trump’s border wall is a classic example of the government claiming to know how to best serve its people even in the face of resounding public opposition. That resolve could prove catastrophic to landowners in the border region who, in the coming months and years, will likely have their properties seized through eminent domain.

These properties often carry more value than the government would ever admit. But none of that will be of consequence to Trump.

Instead, he’ll gladly evict vulnerable borderlands residents for the sake of the supposed greater good — and their safety. Is this really the protection they need?