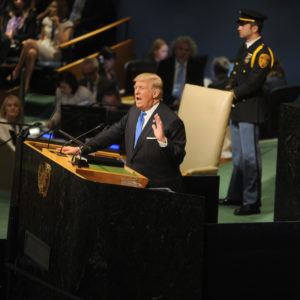 From Asia to the Mideast, Trump Is Isolating the U.S.

WASHINGTON — President Donald Trump is plunging deeper and deeper into the cold depths of foreign policy issues from the Middle East to Asia.

He appears highly uncertain what to do about North Korea, despite colorful quotes about inflicting “fire and fury” on North Korea, and he’s in danger of totally turning off any real support that he might have hoped to get from China and Russia.

In the Middle East, his problems are different but equally pronounced. He’s alienated a number of countries in the region by threatening to cut off aid to those voting in the U.N. General Assembly for a resolution calling for the United States to retract his decision to recognize Jerusalem as the Israeli capital.

It’s hard to know where Trump is in worse trouble, but he’s definitely getting on the wrong side of China’s President Xi Jinping with a lengthy foreign policy declaration castigating China for just about everything from unfair trade practices to regional expansionism.

In his statement of national security strategy, Trump declared his purpose during his campaign for president last year is to “make America great again,” but the speech deepened rifts with rival powers. The danger is that he is isolating the United States from friends and foes while doing little or nothing seriously to resolve festering problems in the Middle East and northeast Asia, particularly Korea.

His sharp criticism of China inspired rebukes from Chinese officials, who denounced him for reverting to the hardline confrontational policies of the Cold War when the late Mao Zedong was China’s leader. The question now is whether President Xi, the strongest Chinese leader since Mao, will be at all inclined to do much to restrain North Korea’s leader Kim Jong-un despite Chinese support for U.N. sanctions imposed on the North after each of its tests of nuclear warheads and the long-range missiles needed to carry them to distant targets.

It seems all the more odd that Trump should alienate Xi after he’s courted him on a number of occasions, hosting him at his estate at Mar-a-Lago, then seeing him most recently for what appeared as highly cordial talks in Beijing.

Stranger still, Trump accused Russia along with China with attempting to undermine America’s global role as a military power as well as the U.S. economy. That remark conjured the darkest period of the Cold War when China and the former Soviet Union appeared as a massive bloc ever hostile to the United States.

The Sino-Soviet split, in which historic enmity between the two communist giants became clear, vastly decreased Cold War fears, and then the demise of Soviet rule, the break-up of the Soviet bloc, and the end of the Mao era brought the Cold War to an end.

Trump’s declaration of “security strategy” would appear to mark a reversal of the warming of U.S. relations with China and Russia, but it’s difficult to discern exactly what Trump is thinking. Just as he engaged in such friendly chats with Xi Jinping, so he’s had nice conversations, in person and on the phone, with Russia’s President Vladimir Putin.

In fact, Trump’s chats with Putin have seemed so good-natured that James Clapper, former U.S. director of national intelligence, has famously remarked, Putin, as a former KGB operative, knows how to handle an asset, and that’s what he’s doing with the president.”

There is no doubt that Russia, under Putin’s orders, has been attempting to subvert the United States, doing whatever it could to bring about Trump’s victory over Hillary Clinton, who as secretary of state had appeared far more hardline than Trump. Now Trump is desperately attempting to sabotage the investigation being conducted by Robert Mueller, a former director of the Federal Bureau of Investigation, into Russia’s role and his own secret links with Russia.

If Trump’s “security strategy” is any guide, however, he may not be so pro-Russian as suspected. Rather, he wants to counter what he sees as the potential of China and Russia, acting together or separately, to destroy American prestige and power.

Not since the end of the Cold War have the lines appeared so sharply drawn with much of the confrontation focusing on what to do about North Korea. China and Russia, as the North’s allies in the Korean War, are making it increasingly clear they would leap to the aid of the North if the rhetoric turned to armed conflict.

Trump’s problems in the Middle East are worsening at exactly the same time. His decision to move the U.S. Embassy from Tel Aviv to Jerusalem does make sense from one point of view. The fact is, the Israeli government is in Jerusalem. It’s standard practice for embassies to be in the capitals of countries.

From the public relations and diplomatic viewpoint, however, the U.S. decision has alienated Arab and Islamic forces throughout the Middle East. It deepens the antagonism with Iran, which has threatened to annihilate Israel despite the deal under which Iran is not going to build nuclear warheads, and it nullifies the slightest chance of coming to terms with the Palestinians, who accuse Israel of stealing their land and vow to recover it.

The net result of Trump’s “security strategy” is to risk isolating the United States from much of the world, including America’s European allies, whom Trump accuses of not doing enough to pay for the defenses provided by the United States.

In an atmosphere of rising tensions, especially surrounding the Korean peninsula, Trump is daring America’s adversaries to stand up against him. He’s gambling on America’s future in the world and his ability to make good on his promise to “make America great again.”