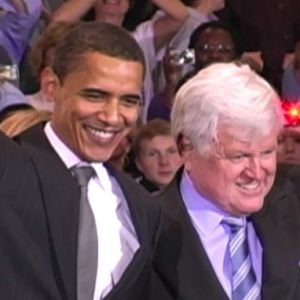 At American University, Obama’s History Increasingly Interweaves With the Kennedys’

On June 10, 1963, with his own characteristic eloquence and that of his speechwriter Ted Sorensen, President John F. Kennedy delivered a landmark commencement address on world peace at American University in Washington, D.C.

The speech was memorable mostly for its content — Sorensen would later call it Kennedy’s best — but the president made clear that the setting was important, highlighting its significance during his first few minutes at the podium.

“This is a young and growing university,” Kennedy said, nodding to AU’s 1914 dedication. “But it has already fulfilled … enlightened hope for the study of history and public affairs in a city devoted to the making of history and to the conduct of the public’s business.”

The public’s business. If nothing else, Kennedy wanted students to believe that the public’s business should be their own, which is why, standing there two summers after starting the Peace Corps, he issued the new graduates a challenge couched as a complement:

I am confident that the men and women who carry the honor of graduating from this institution will continue to give from their lives, from their talents, a high measure of public service and public support.

I was thinking about those words on Wednesday, as President Obama invoked Kennedy’s commencement in his own AU address about diplomacy with Iran. I know hundreds of the men and women JFK was talking about, and I’m grateful to be one of them, having spent five incredible years as a student at American.

I just wish the 35th president could have been in the School of International Service atrium on Wednesday morning. I’d give anything to know what he’d make of our alma mater in 2015 and, more specifically, the remarkable series of campus events that have interwoven his family’s legacy with Obama’s since the early days of 2008.

On the one hand, I don’t think he’d be surprised by the emphasis AU continues to place on public service. Despite what a misguided PR campaign might suggest, the ethos of our campus isn’t that wonkiness (read: expertise) matters most. It’s that citizenship — to community, country and the broader world — is every bit as important as whatever academic scholarship one might pursue. Especially in the School of Public Affairs, where I studied, there is an infectious idealism about politics, helping to make AU among the most politically active student bodies in the country. That would please Kennedy, although he could’ve predicted it in his own time.

What no one could have predicted in 1963, and what hung over Obama’s appearance this week, is that American University would be the place where the nation’s first black president repeatedly channeled Camelot, first taking up Kennedy’s torch with a pivotal campaign endorsement and later wielding JFK’s peace speech like an Excalibur sword to parry criticism of his own foreign policy.

It began on January 28, 2008, as Obama stepped into AU’s packed Bender Arena. Joining him was Ted Kennedy, the Massachusetts senator who was John’s brother; Ted’s son Patrick, the Rhode Island congressman; and Caroline Kennedy, John’s only daughter.

I was there that day. From the press risers, I watched the crowd of students explode with excitement as the group took the stage, U2’s “City of Blinding Lights” swelling from the sound system.

The Kennedys had come to endorse Obama at a critical moment in his Democratic presidential primary fight with Hillary Clinton, and they would do so forcefully, casting the freshman senator from Illinois as their rightful political heir.

“When I came to the Senate at the age of 30, we had a new president who inspired the nation — especially the young – to seek a new frontier,” Ted said of JFK. “This is another such time.”

When his turn at the microphones came, Obama said the Kennedy spirt lived on “in those Americans who refuse to be deterred by the scale of the challenges we face, who know – as President Kennedy said at this university — that ‘no problem of human destiny is beyond human beings.'”

On a more personal note, he explained how the Kennedys had played an integral role in the life of his family, helping to fund his Kenyan father’s education in America:

[P]art of what made it possible for him to come here was an effort by the young senator from Massachusetts at the time, John F. Kennedy, and by a grant from the Kennedy Foundation to help Kenyan students pay for travel. So it is partly because of their generosity that my father came to this country, and because he did, I stand before you today.

As president, Obama has returned to AU three times, and he’s mentioned the Kennedys in each instance. He paid tribute to Ted, who had died in 2009, during a 2010 campus speech on immigration. In 2013, he came back for an interview with the MSNBC host — and JFK biographer — Chris Matthews, saying he’d had “just wonderful experiences” at American. He even echoed the Kennedy call to public service, telling students that politics “continues to be a way to serve that I think can be noble.”

On Wednesday, the president apologized for arriving late to his Iran speech, but assured the audience, “It is a great honor to be back at American University, which has prepared generations of young people for service in public life.”

His latest AU appearance felt like the culmination of all the others. He chose the venue to defend what will almost certainly be the most significant foreign policy initiative of his tenure, and he was quick to summon all of the school’s Kennedy history in making his case:

We can never quite know what JFK would think about today’s policy debates. But there’s one thing he’d surely love: for over a century now, in this city devoted to the making of history, students at a school chartered by Congress have committed to doing the public’s business. And since 2008, they’ve been listening to these amazing historical echoes — this conversation between two presidents — from within their campus gates.

For the most politically active college kids in the country, it doesn’t get much better than that.