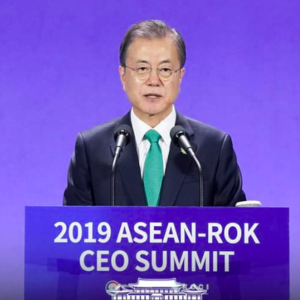 BUSAN, South Korea — Rodrigo Duterte, the president of the Philippines, had his hands in his pockets and a bored expression on his rugged face as South Korea’s President Moon Jae-in extolled high-tech Korean manufacturers on the big day of his summit with the leaders of 10 Southeast Asian countries.

Having sat or stood through a lot of briefings, I could empathize with Duterte’s desire to be almost anywhere except in front of some smoothie trying to sell a product. Most of the assembled potentates endured Moon’s sales talk with admirable patience, even the odd show of interest. You have to hand it to Moon for having gotten all of them together under one roof for the biggest mass summit ever staged here.

But why was Moon so eager to court the leaders from all 10 members of ASEAN, the Association of Southeast Asian Nations? What impelled him to order the tremendous planning, the entertainment, the security, the dinners, the media facilities that go into a summit?

Clearly Moon needs to get away from economic troubles at home, to distract from conservative opposition, to demonstrate that he’s still the leader that he appeared to be in the “snap election” of 2017 after the Candlelight Revolution that drove Park Geun-hye from office and into jail.

It might be easy to dismiss the Busan summit as a show of little substance, but the statements that emerged at the end of the confab betrayed a certain desperation. Moon faces criticism not only for the slowdown of the economy, for unemployment and underemployment, for faltering production and exports but also for getting nowhere with North Korea.

South Korea’s economy has gone through ups downs over the years and may well recover, as in the past, but dialog with the North has never worked in the end.

Moon would have scored a triumph of incredible proportions had he managed to persuade North Korea’s Kim Jong-un to come on down and join the party. We’ve been quite surprised over the last year-and-a-half by the three summits Moon scored with Kim and also by the two summits between Kim and President Trump. You always have to expect the unexpected.

It should be clear by now, however, that reconciliation with Kim is not happening. There was no way that Kim would fly down to Busan. The deepest he has gone into South Korea was a few feet across the line at Panmunjom. For him to venture beyond the Demilitarized Zone, into real South Korean territory, would have been out of the question.

Similarly, Moon keeps dreaming of other shows of reconciliation. He honestly believed that Pope Francis, while visiting Japan, might see Kim at Panmunjom, and that Kim might have consented to meet the leader of the world’s Roman Catholics when Christian worship in Kim’s kingdom is a cardinal offense, punishable by death.

And now Moon pursues yet another fantasy, a proposal that South and North Korea get together and promote a joint bid for hosting the 2032 Olympics. It’s not out of the question that North and South Korean athletes form unified teams, but even they are a bit of a sham, a show for public relations effect. No one’s on edge waiting for North Korea to join the South in an all-Korea Olympic bid.

None of which should detract from the fact that the Busan ASEAN summit actually went quite well. In an exercise of meticulous planning, you have to hand it to Moon and his aides for corralling all these leaders for an event overflowing with rhetoric and promises of peace and goodwill. The fancy verbiage was no doubt ghost-written to be forgotten, but it did sound good on the TV news.

In retrospect, however, did anyone notice that no one mentioned China, the great power that overshadows the region? None of those heads of state seemed to have heard of China’s claim to the South China Sea against counter-claims by four ASEAN members, Vietnam, the Philippines, Malaysia and Brunei. Nor did anyone think of China’s belt and road initiative across the Himalayas.

Was it not to combat Chinese influence that the conference wound up with high-flown declarations of co-prosperity? Interestingly, co-prosperity was the word the Japanese used for their own advances into Southeast Asia in the late 1930s and 1940s as they held up the vision of a “co-prosperity sphere” dominated by imperial Japan.

History repeats itself, this time with South Korea showing the way — it is hoped — on the road to peace, not conflict with Asia’s dominant power, China, always there but never named in the euphoria of the summit.