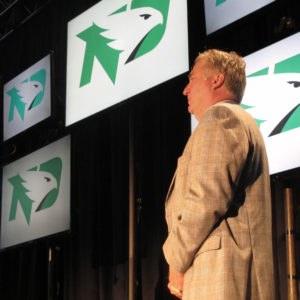 At UND, the “Fighting Sioux” Are Gone, But Mascot Controversy Remains at Center Court

For years sports fans in North Dakota cheered on the Fighting Sioux, a name that inspired a sort of stubborn pride even as it came under attack for being racially insensitive. As the University of North Dakota (UND) fought to keep the name in the face of years of reprimands by the NCAA, one of the factors at play was former Fighting Sioux hockey player and wealthy alumnus Ralph Engelstad, who donated $100 million for the construction of a state of the art ice rink and hockey training facility on the condition that the school retain its mascot. UND lost the fight to retain the logo, but emails show that resistance to the mascot change on the part of the Engelstad family continue even after Ralph Engelstad’s death, a decision which has the potential to impact millions of dollars in revenue for the university.

This time around, basketball, not hockey is the source of consternation. The Betty Engelstad Sioux Center, where the university’s basketball, volleyball, and soccer teams play, is the new subject of controversy. According to emails obtained through a local records request earlier this year, which logo will be painted on the floor of the newly resurfaced court is at the center–literally–of the squabble. Will the floor say “Fighting Hawks,” the school’s new mascot, or a generic “University of North Dakota”?

According to emails obtained by North Dakota radio host Rob Port, Mark Kennedy, president of the University of North Dakota, made repeated requests to the foundation to allow the hawks logo to be used in the center of the court.

(The Ralph Engelstad Arena, which the donor also bequeathed to the university, was noted for its inclusion of the Fighting Sioux logo in the walls, floor, and seats of the arena, intentionally making a mascot change difficult.)

“It is clearly in the interest of the University of North Dakota and our athletics department that our Fighting Hawk logo be prominently displayed at the center court of The Betty when the floor is redone,” wrote Kennedy in a March 30 email. The email was part of an ongoing struggle between the school and the foundation which owns and manages the arena and sports complex for the university.

The feud shows complexity of licensing and ticket arrangements in college sports, even in a market like North Dakota, which is relatively small. Under the terms of the bequest, RE Arena Inc. (REA) owns and manages both the Ralph Engelstad Arena and the Betty Engelstad Sioux Center. The university in turn rents the space from the foundation and receives a portion of all ticket revenues and sponsorship sales collected by RE Arena.

As of June 30, 2017, RE Arena had retained 52 percent of ticket revenue for ticketed UND athletic events (men’s hockey, football, men’s and women’s basketball and volleyball) and remitted 48 percent to UND. In addition, the arena corporation remitted “64 percent of such sponsorship revenue, net of direct costs and remit[ted] 36 percent to the UND net of direct costs,” according to numbers given to local press. For fiscal year 2017, ticket sales brought in $4.6 million gross, earning UND $2.2 million and RE Arena a $2.4 million share.

In an email at the end of April, Kennedy reiterated his desire to work with the REA on a compromise painting for center court.

“It would be shortsighted to limit the Engelstad legacy to a couple of buildings. It is, and could remain, so much more…,” Kennedy reiterated in an email at the end of April. “…The Engelstad legacy embodied in the buildings is dwarfed by the appreciation in the hearts and minds of the players who have benefited from what these arena facilitate.”

Despite pressure from the university administration, the family foundation has been holding to its position that the center court logo should represent the university itself, not its newfound hawks mascot, and which would feature text reading “North Dakota,” rather than a mascot.

Despite these letters, at the end of April, representatives from the Engelstad Foundation submitted to the university plans for center court which did not include the hawks logo and which the university later characterized as “short-sighted.”

“Anything other than a Hawk at center court at the Betty risks shifting attitudes from one of appreciation to resentment,” wrote Kennedy on April 25.

According to the emails, the university then attempted to meet with representatives from the Engelstad Foundation for several weeks between March and April, but was unsuccessful.

In an interview with the Grand Forks Herald, Kris Engelstad McGarry, daughter of Ralph Endelstad, reiterated that the mascot controversy did not factor in to the present disagreements between the university and the family, instead describing a dysfunctional relationship with Kennedy and the school administration.

“The issue for a very long time in this community, and we seemed to get stuck in the middle of it, was the issue about the logo,” McGarry told the paper. “That’s a non-issue for me and for us. It’s decided. We complied to the NCAA. We did what they asked us to do. I don’t have an issue, period, with the logo situation, because it was settled.”

The school has argued that leaving out a mascot at center court would effect advertising revenue when games are broadcast and that not having a mascot could lead to confusion with rival North Dakota State University. Sports fans, think the latter is unlikely, citing a longstanding rivalry between the schools.

According to a spokesman for the school, work on painting the center court has not yet begun and the school remains in a standoff with the family about which design will go in at center court, North Dakota or the Fighting Hawks.