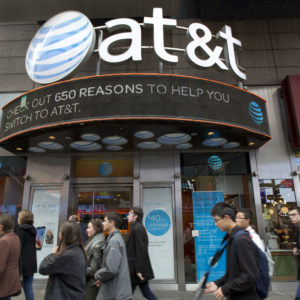 Zero-Rating and 5G Are Among Top Issues in Proposed AT&T, Time Warner Merger

Presidential candidates, lawmakers  and media weighed in on AT&T’s $85.4 billion bid to buy Time Warner this weekend, but it could be the quiet, ongoing inquiry at the Federal Communications Commission into an increasingly popular free data tactic by wireless providers that decides the merger’s fate.

Vertically integrating the mobile and cable giants will put major television and box office brands like HBO and Warner Bros. under the same roof, cutting through legal red tape and providing a new platform for millions of AT&T subscribers to access Time Warner-owned video content in what many consider the new “golden age of television.”

David McAtee, AT&T’s senior executive vice president and general counsel, agrees, and in a statement to investors Monday described the distribution of that content wirelessly to consumers as the primary goal of the merger.

“For the first time, a nationwide mobile broadband provider will have a major content provider as an ‘anchor tenant’ to support a broader array of video offerings,” McAtee wrote. “AT&T and Time Warner will begin to create innovative programming optimized for viewing on any device and launch new generations of video services that are interactive, immersive, multi-user, and integrated with user-generated content.”

The companies’ lofty goal of breaking new ground by integrating video and social media interaction on-the-go wouldn’t be possible without cutting out the lengthy process of negotiating copyright distribution across multiple platforms for various uses, McAtee said. He added their shared vision will increase competition by forcing fellow players in those markets to compete, setting off — in a phrase borrowed from FCC Chairman Tom Wheeler — “a virtuous cycle of innovation and investment that expands consumer choice.”

“Market transformations often begin when a single well-positioned company breaks the mold and introduces a disruptive business model that responds to untapped consumer demand,” the statement reads. “Of course, those offerings will include content from many other providers.”

How the companies propose to treat that content compared to their own could be deciding factor in whether regulators green light the merger. AT&T is one of a number of major wireless providers to recently launch sponsored data programs — when wireless carriers partner with content providers to zero-rate their traffic from counting against subscriber monthly data caps.

T-Mobile’s Binge On helped bring the topic into debate earlier this year when net neutrality groups accused the “uncarrier” of prioritizing and throttling certain web traffic by partnering with video distributors including Netflix and Hulu to zero-rate their traffic on its network, prompting bombastic T-Mobile CEO John Legere to go on a vulgar-laden Twitter rant he later apologized for.

The question of whether such programs violate the FCC’s net neutrality rules hasn’t been dispelled. The agency has spent nearly a year conducting an inquiry into whether the tactic violates the rules and Wheeler has been reluctant to provide details on the status of the inquiry, which has likely taken a backseat to his end of the year agenda of passing new internet privacy, cable set-top box and high-capacity business broadband rules.

During AT&T’s third-quarter earnings call Monday CEO Randall Stephenson said he couldn’t “pre-judge” whether the FCC would put the brakes on the deal over zero-rating.

“I really don’t know,” Stephenson said. “[We’re] just going to have to get into the process, put the data out with regulators and begin that effort, and the sausage will come out the way the sausage comes out.”

Even if Wheeler doesn’t get a chance to scrutinize the deal, there’s a good chance his successor won’t look any more favorably on it. Representatives from both the Trump and Clinton campaigns expressed skepticism this weekend over whether it should go through.

“I share those concerns and questions,” Virginia Democrat and Clinton running mate Sen. Tim Kaine said on NBC’s Meet the Press Sunday. “We’ve got to get to the bottom of them. Generally pro-competition and less concentration, I think, is generally helpful, especially in the media. But this has just been announced, and I haven’t had a chance to dig into the details.”

“AT&T, the original and abusive ‘Ma Bell’ telephone monopoly, is now trying to buy Time Warner and thus the wildly anti-Trump CNN,” Navarro said according to a statement reported in The Hill. “Donald Trump would never approve such a deal because it concentrates too much power in the hands of the too and powerful few.”

McAtee borrowed from Tom Wheeler’s playbook a second time Monday, saying the merger will allow AT&T to more robustly roll out its high-speed 5G wireless network and prompt other wireless providers to do the same, boosting competition with wired broadband — another goal of Wheeler’s the FCC took action on earlier this year.

“[The merger] spurs greater investment in the nation’s broadband infrastructure, particularly ultra-fast 5G wireless networks that will one day compete head-to-head with the broadband offerings of entrenched cable companies,” McAtee said. “[F]orcing other providers to compete with innovations of their own and creating demand for wireless connectivity that will give all wireless providers greater confidence to deploy 5G networks faster, deeper, and more robustly than they otherwise would.”