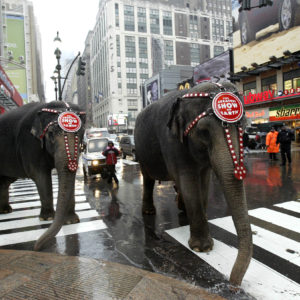 Elephants from the Ringling Bros. and Barnum & Bailey Circus take a drink from water running along Seventh Avenue, as they walk around Madison Square Garden in New York, Monday, March 28, 2005. (AP Photo/Gregory Bull)
[IS] Opinions

A recent decision by the Ringling Bros. and Barnum & Bailey Circus to shutter “the Greatest Show on Earth” is a cautionary tale for responsible dog breeders and those who enjoy the love and companionship of purebred dogs.

That’s because the same activists who attacked the circus over the last several years are taking aim squarely at dog lovers.

Animal activists too often build their case on assumptions, not facts. Consider the campaign they waged against Ringling Brothers. They erroneously accused the company of animal cruelty. They ignored the company’s descriptions of its carefully researched, science-based practices of animal care. They launched hateful campaigns attracting thousands of well-meaning but equally misinformed individuals, who joined in bullying the company and calling for unnecessary legislation.

The owner of Ringling Brothers, Feld Entertainment, was also the target of a 14-year old lawsuit alleging abuse of its elephants brought by groups including The American Society for the Prevention of Cruelty to Animals and the Humane Society of the United States. Although the suit was settled in Feld’s favor with the ASPCA paying $9.3 million in 2012 and HSUS and other groups paying an additional $15.75 million in 2014, the damage was done. There is no unringing the bell of many years’ worth of bad publicity and unfounded allegations.

The same groups are now setting their sights on pet breeding. Without action now, responsible dog breeders could easily become collateral damage. Anti-breeder campaigns that use catchy slogans like “adopt don’t shop” and call to “stop puppy mills” can confuse the public about the difference between good, responsible breeders and cruel, inhumane owners. We can all agree that keeping animals in cruel or inhumane conditions for any purpose, including breeding, is abhorrent. We can be also grateful that animal cruelty is a felony crime in all 50 states.

But when it comes to regulation, these groups are using a hatchet where a scalpel will do. Some of the legislation promoted by animal activists is so misguided in scope that it will profoundly hamper legitimate dog breeders and people who want to raise a purebred puppy while having no impact on the illegal mills already operating under the radar.

Just one example is a pending amendment to a New Jersey bill. As proposed, the Pet Purchase Protection Act will be amended to define a “pet dealer” as not just a business that sells pets to consumers, but as any person “who sells more than five cats or dogs in one year to consumers.”

Since a typical litter of Labrador Retrievers — America’s most popular breed — is eight puppies, even a neighbor down the street offering their puppies for sale would be caught in the net of this legislation.

But it gets worse. Not only will small breeders in the Garden State be subject to the regulations imposed on commercial kennels and pet stores, they may be penalized for being home-based. The law pushes enforcement of its operational regulations to state and local municipalities. Since most municipalities in New Jersey do not allow commercial enterprises or animal dealers in residential zones, this leaves small, home-based breeders in violation. If this amendment passes, these breeders may end up facing regulations they cannot obey and state laws that can carry penalties as high as $20,000.

Another recent example is a law that was introduced in Puerto Rico last year and is expected back this year. In a bid to manage the island’s problem with stray dogs, the law would require all dog owners to spay or neuter their animals. Though well-intentioned, it will punish responsible dog owners and breeders who do not let their dogs wander. Worse, it will ensure that the only dogs that can be bred are the feral dogs, which only compounds the problem.

Animal activist groups may be jumping for joy at these efforts, but this type of legislation only ends up harming and deterring exactly the type of small, local, responsible breeders that should be encouraged.

The true loss of these overbearing campaigns cannot be measured. The Ringling Brothers circus allowed millions of Americans a real-life experience in the company of extraordinary animals. Talk to a child about the most memorable events in his or her life, and invariably “going to the circus and seeing the elephants” is on the short list, if not at the very top.

The “Greatest Show On Earth” will soon be relegated to history books and memories. If activists have their way, they will be threatening another profound experience — the joy of choosing and raising a beloved breed of puppy.