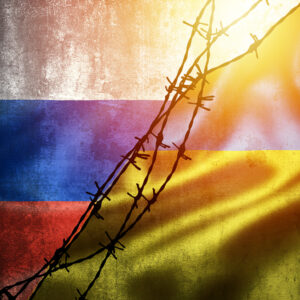 It is almost conventional wisdom to say that Russia’s invasion of Ukraine marks a turning point in the next major conflict between liberal democracies and authoritarian regimes. But Russia’s aggression did not happen in a vacuum, even though it is a visible milestone. Vladimir Putin’s unjust and brutal invasion stands among an increasing but often ignored series of autocratic “breadcrumbs.”

For 16 years, Freedom House reports, the world has experienced a decline in freedom. In the last year alone, nearly 75 percent of the world’s population lived in a country that faced deterioration; only 20 percent live in countries rated as “free.”

While the rise of autocracies has gotten us to this point, the United States and other Western democracies cannot discount how our division and recent isolationist leanings have contributed to the current geopolitical standoff. Or the fact that autocrats have significantly exploited these factors to their benefit.

Authoritarians like Putin and China’s Xi Jinping use crises to expand and fortify their power. COVID-19 provided a distraction to their abuses and atrocities over the last two years. But the examples speak for themselves — from China’s genocide of the Uyghurs to the worst crackdown on human rights inside Russia since the breakup of the Soviet Union.

The Global North’s projection of a longstanding bias toward the Global South likewise has implications. Too often, we pay attention only when governments or others perpetrate injustices against populations who most closely reflect our own societies.

Moreover, the global community can be fickle in holding accountable regimes with little respect for basic freedoms and a society’s general well-being. These inconsistencies in holding regimes accountable further weaken the potential for democratic expansion.

An accumulation of authoritarian “breadcrumbs” demonstrates these truths worldwide. Consider these examples:

—Afghanistan has been described as the world’s worst humanitarian crisis. Almost a year after the Taliban unjustly assumed control, the situation on the ground deteriorated rapidly and unrelentingly. The oppression and abuse of the Taliban have reinforced a “hell on earth” reality for millions of Afghans.

Most prominent is the Taliban’s archaic and misogynistic mandates to erase the status of women and girls in public life. Women cannot work. Female students cannot attend school after the sixth grade. In some communities, they are barred from accessing markets, mosques and — for the poorest women — public bath houses … a lifeline for basic hygiene amid widespread poverty.

The Taliban have also used the circumstances of women’s rights and girls’ education as a deranged bargaining chip with little response from the most visible democratic leaders in the world.

—After Burma’s last election in February 2021, the country’s military staged a coup against the democratically elected National League for Democracy. Since then, the military has implemented a state of emergency to legitimize its violent and unjust crackdown on pro-democracy opposition groups.

The world denounced the situation as events first unfolded. But, over a year later, little has changed for the better. Signs of real deterioration in the country were there — but the international community did little to help.

—African countries have seen numerous coups play out over the last two years — from Burkina Faso and Chad to Mali and Sudan. The atrocities committed in South Sudan and Ethiopia’s Tigray continue with global outcry at a small fraction of the concern expressed for the situation in Ukraine.

The ferocity and growth of autocratic influence — not limited to the two big examples of Russia and China — cannot be ignored any longer.

For the sake of America’s own security and prosperity, it is in our interest to ensure an engaged presence in the world that prioritizes outreach and partnership with fellow democracies. We must use our platform to lift the voices and experiences of those who have been silenced. In doing so, we must meaningfully support those seeking to install foundational principles of transparency, good governance and equity within their societies and impose aggressive consequences on those engaged in gross human rights abuses and corruption through tools such as the Magnitsky Act.

Most important, we must consistently articulate the belief that the inherent dignity of all people matters. Too often, the West overlooks the misdeeds of rogue authorities. It may be convenient, but complacency only encourages bad actors.

And eventually — as we have seen play out in so many instances across history — little fires can quickly become global catastrophes when left to smolder.