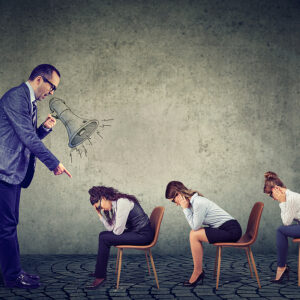 Authoritarianism, Like COVID, Is Within Us. We Need to Reject It.

If the days of COVID drag on, we could be grappling with a problem far more complex and formidable than a highly contagious and often fatal respiratory virus that likes to mutate: The pandemic spread of authoritarianism.

Many Americans—somewhere less than 40 percent of us, say polls—live on authoritarian principles, a package of outspoken beliefs that sound not unlike your racist uncle. The package includes hostility for people and ideas deemed unacceptably different. It includes contempt for democratic pillars, such as due process. Our friends and neighbors who have authoritarian ideals often express outrage if confronted with the notion that America is in decline or if a president fails to present as authoritative and powerful.

Threats to the belief that America is the best or most powerful nation can be a catalyst for vocal intolerance and aggression, says former Princeton professor of politics Karen Stenner in her 2005 landmark “The Authoritarian Dynamic.” She portrays authoritarianism as a system of beliefs akin to religious doctrine. In times of peace and prosperity, the system is dormant and quiet. Given anxiety and the right crisis, it jumps to life.

Stenner’s analysis rings true 16 years on. We feel the tide of authoritarianism—high and rising—and we can see its link to COVID, which fuels discontent by the fear it inspires, by the restrictions it imposes. We hear news of other countries (New Zealand, for example) bettering America in the war against the virus. America looks like it’s losing. President Joe Biden can’t declare victory, can’t make us feel that everything is fine. Instead, we learn how it feels to endure a drawn-out struggle against an invisible, airborne force that brings death, disability. and demoralization.

Demoralization, when added to outrage and aggression, stokes—predictably—violent action of the type we saw on January 6 in Washington, D.C. It predictably feeds authoritarian aggression by adding to a pent-up and unsatisfied hunger for affirmation. Demoralization can make people cynical, less likely to believe unprecedented and uncomfortable changes in lifestyle are necessary. It should be no surprise that so many authoritarian Americans refuse to use masks, that they’ve developed a simple and self-justified worldview. It’s no wonder that so many of them are drawn to leaders who reinforce their worldview.

For those eager for American superiority, who believe the normal ones are their compatriots, these reactions are predictable, read in light of Stenner’s findings. So, it stands to reason that the longer COVID is a threat, the more chance latent authoritarianism has to rise up and stomp on our Constitutional status quo.

Authoritarianism is part of humanity, but its spread would be cataclysmic for America. Have you noticed how authoritarian countries are dangerous and overwhelmed by poverty?

I conducted extensive research on Russian culture when writing “Blood Lily,” my new book. Under president-for-life Vladimir Putin—the world’s most successful authoritarian—the people live miserably. Alcoholism and suicide have been epidemic for decades. The World Population Review claims Russia has more alcoholics than any other country. In America, about 5.5 percent of men are alcoholics. In Russia, it’s 16 percent.

About 25 Russians out of every 100,000 kill themselves each year—far above the world average of roughly eight per 100,000. In Russia, the rich need armed guards to leave home because so many of the poor are so desperate. As an authoritarian dictator, Putin does as many of his compatriots: He steals from his country and lets his citizens suffer.

If America’s leaders offer us reasons for confidence and optimism, making us feel invested in our country’s future, the authoritarian trend might reverse itself. Let’s hope and pray that’s what happens.

Spencer Stephens is an expert on authoritarianism and the author of the new novel “Blood Lily.” He wrote this for InsideSources.