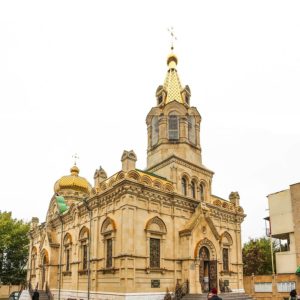 Azerbaijan Pushes Back Against Critics, Pledges to Protect Christian Sites

The history of the Christian Church in Azerbaijan stretches back to the First Century AD when, according to local lore, St. Bartholemew preached the Gospel before being flayed to death in what is now neighboring Armenia.

But for many Christians in the region, the most important history at the moment stretches back just a month. That’s when six weeks of intense fighting between Azerbaijan and Armenia over the Nagorno-Karabakh region and territories outside its formal borders came to an end. The cease-fire agreement brokered by Russia calls for Azerbaijan to take control of the outlying territories. And with them, many Christian churches and historic sites, which will now be under the control of Azerbaijan’s Muslim government.

Some Christians fear the sites will be desecrated or destroyed. After a visit to the region earlier this month, Archbishop José Bettencourt, the papal nuncio to Georgia and Armenia, “expressed concern that much remains unresolved a month after the Russian-brokered ceasefire negotiations and appealed for the preservation of Nagorno-Karabakh’s Christian cultural heritage,” according to the Catholic News Agency.

The UK’s Bishop of St. Albans, Dr. Alan Smith, has called for public guarantees that Azerbaijan will preserve Christian places of worship in the territory now under its control.

All of which frustrates Elin Suleymanov, Azerbaijan’s ambassador to the U.S.

“We are a secular country known for our tolerance,” Suleymanov tells InsideSources. “We’re home to one of the oldest Jewish communities in the Muslim world. We’ve hosted two Popes in the past twenty years. We have many Christians and people of other faiths who live here. The real question is why is the issue of holy sites being brought up again and again?”

Soon after agreeing to the Russian-backed peace deal, Azerbaijani President Ilham Aliyev pledged that Christian churches would be protected. Among the sites is the Dadivank Monastery, which dates back to the 9th Century. Azerbaijan now controls hundreds of Armenian churches and monuments, like the Amaras Monastery and the Basilica of Tsitsernavank.

“Christians of Azerbaijan will have access to these churches,” Aliyev’s office said in a statement. “President Aliyev said that Christian churches in Azerbaijani territories, which are returned to Azerbaijan in accordance with the trilateral statement, will also be properly protected by the state.”

It’s a message the Baku government has been pushing hard to the international community, and the Christian world as well.

Armenia and its allies have responded with claims that churches are already being damaged in the territories Azerbaijan now controls and that the Muslim-majority country, with close ties to the (some say) pro-Islamist Erdogan government in Turkey, can’t be trusted to protect Christian sites.

“Once again– we are a secular country. We have a Muslim majority population and a secular government that has relationships with Russia, which is Christian; and Israel, which is Jewish.” Indeed, at a time when the Abraham Accords are being celebrated for bringing together Israel and Muslim nations like Morocco and the UAE, Azerbaijan has had close ties with the Jewish state since 1992.

Suleymanov sees a strategy behind the Armenian efforts to make the care of Christian sites an issue, and it’s not theology but rather politics.

“To me, this is a dangerous conversation. It’s an attempt to divide rather than to unite,” Suleymanov says. “The dispute over these territories, which rightfully belong to Azerbaijan, is simply a border dispute, but the Armenians portray it as a clash of civilizations. I believe their motive is to get the Christian community behind them, and they’re using hysterical claims to promote conflict.”

It’s indisputable that religion plays a greater role in the Armenian government than it does in most Western democracies. The religion is tied to a political nationalism as well. “They have more religion in their politics than we do– perhaps a little too much,” Suleymanov says, noting wryly that one of Christian Armenia’s regional allies is the Islamic Republic of Iran.

“In the end, our goal is a regional alliance with Armenia as an integral part. We don’t want conflict. Our message is, let’s move into the 21st century together,” Suleymanov said.