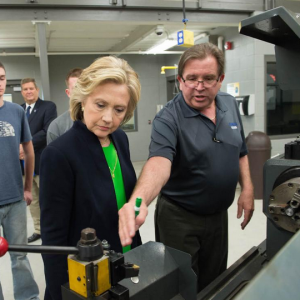 Back in South Carolina, Clinton Plays Up Bipartisanship to Fight Youth Unemployment

NORTH CHARLESTON, SC – With temperatures breaking 100 degrees in what already feels like the dog days of summer, people from across the Lowcountry and all of South Carolina began to line up to see Hillary Clinton at Trident Technical College in this First in the South primary state.

As the modest line started slowly making its way into the venue, Kathy Smith, a college professor from Rock Hill, SC was undaunted by the heat or the meandering pace of those gathered. After driving 3 hours, clad in 2008 “Educators for Clinton” buttons and other memorabilia reminiscent of the 2008 primary, she couldn’t be happier. “I’ve had these buttons for 8 years,” she told some of the dozens of volunteers at the end of the line who were checking tickets and signing up people who were attending the event. “I know you want me to buy new ones, but I was just so excited to wear these again.”

Kathy was ready to hear from Clinton again, as well. “I think the most important thing our country has is our children’s minds,” she explained when asked why she wanted to hear from Clinton on education. “It’s terrible when states like South Carolina put less than 10 percent of funding into schools.”

This was Clinton’s second trip to the Palmetto State since she lost the 2007 primary to then-Senator Obama, and this was her first event open to the public. She spoke last month to over 200 women at the South Carolina Democratic Women’s Council about pay equity. Today, she proposed to about 300 listeners that government should offer tax credits to businesses who create apprenticeships to combat youth unemployment.

While the proposal has bipartisan backing in Congress, it’s smart politically for Clinton, who needs to excite young people, like Reynolds, as a key demographic group from the Obama coalition. Millennials, age 18-34, will be the largest generation by November 2016, and also maintain one of the highest unemployment rates stuck around 8 percent.

Clinton’s speech was less partisan in tone than other policy speeches, due in part to being in a state dominated by Republican officeholders and not won by a Democratic presidential nominee since Jimmy Carter. She did. However. strongly defend unions for standing up for workers’ rights, a subject not all in attendance agree with and a line that got no applause.

“I’m a firm believer in us being a right-to-work state,” North Charleston City Councilman Bob King said after the event. “She’s right on what our technical schools and community colleges are doing to get kids the right training, but we wouldn’t get those companies like BMW, Boeing, and now Volvo to come here if we had unions.” King still believes Clinton will ultimately win in the general election. “None of the Republicans or other Democrats are going to be able to match her substance.”

Clinton’s forum comes after the campaign of Vermont Senator Bernie Sanders (I) sent out a release earlier Wednesday saying they had to switch to a larger venue in anticipation of an ever growing crowd for his upcoming swing down to South Carolina this Sunday. Recent polls show Sanders gaining momentum with the progressive wing of the party and the South Carolina chapter of the AFL-CIO endorsing him just last week.

But Sanders still has a long way to go to woo the Clinton faithful. Asked if any other candidates could be credible, Smith demurred. “Who’s the guy from Vermont? Bernie Sanders? I thought you had to be a Democrat to run in the Democratic primary,” she quipped. “Now Hillary and Elizabeth Warren, that’s my ticket.”