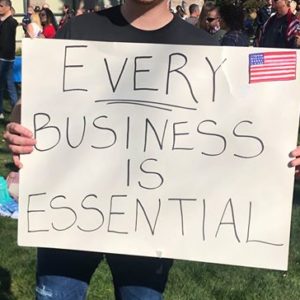 When protesters turned out to demand the U.S. economy be re-opened sooner rather than later, some of their “Live Free or Die” rhetoric echoed Tea Party rallies a decade earlier. And so did some of the reaction.

Despite the economic devastation of the coronavirus lockdown — more than 22 million jobs lost and predictions that the economy will suffer its biggest contraction since 1946 — people pleading for relief from the lockdown were dismissed and sometimes even mocked.

When Fox News’ Chris Wallace asked Speaker of the House Nancy Pelosi if she could understand why they were protesting, she replied, “No, not really.”

Democratic Gov. Gretchen Whitmer warned protesters their actions might lead her to impose an even longer lockdown in Michigan. “It’s that kind of irresponsible action that puts us in this situation where we might have to actually think about extending stay-at-home orders, which is supposedly what they protesting,” Whitmer said on MSNBC.

And comedian Patton Oswalt tweeted, “Anne Frank spent 2 years hiding in an attic and we’ve been home for just over a month with Netflix, food delivery & video games and there are people risking viral death by storming state capital buildings & screaming, ‘Open Fuddruckers!”

The protesters’ reply? We don’t want to eat at Fuddruckers. We want to work there.

Reaction to the #ReOpenNow activists resembles the condescending “basket of deplorables” rhetoric Democratic nominee Hillary Clinton deployed in the 2016 election, with less-than-successful results. It also reflects an often-overlooked class conflict over the coronavirus strategy: It’s easier for affluent, college-educated workers to escape the worst effects of the shutdown than it is for their blue-collar, working-class counterparts.

According to a report by the international consulting firm McKinsey, “up to one-third of American jobs may be vulnerable,” due up to the lockdown, “and more than 80 percent are held by low-income workers.”

“Our own analysis finds that the first phase of the battle to contain COVID-19 could leave 42 million to 54 million net jobs vulnerable to reductions in hours or pay, temporary furloughs, or permanent layoffs. Many Americans are simply unable to go to work for an uncertain period of time,” McKinsey reported.

That’s the same message heard at the #ReOpen rallies from Colorado to New Hampshire. “I own a small, little solar broker company, and it’s wreaked havoc on us,” said Eric Moutsos, who organized a rally in Salt Lake City, Utah.

In Michigan, GOP Speaker of the House Lee Chatfield said, “people across the state have had their livelihoods taken away, and they’re being told they can’t work their jobs and take care of their families. And I think that’s wrong.”

While some lockdown protesters espouse conspiratorial views of a “plan-demic” designed to undermine the Trump presidency, most tell pollsters and the press they agree the COVID-19 crisis is real. They’re trying to make Trump’s “the cure can’t be worse than the disease” argument, from the viewpoint of Americans most impacted by it.

These are people who have little sympathy when they see a tweet from CNN’s Brian Stelter about how he “crawled in bed and cried for our pre-pandemic lives. Tears that had been waiting a month to escape.” They note the six-figure salaried Stelter still has his cable news gig, while millions of construction, retail and restaurant workers don’t.

Stelter is also part of the social strata for whom working from home isn’t a hardship. That’s yet another coronavirus class divide. According to the Bureau of Labor Statistics, while 60 percent of workers in the top 25 percent income group have jobs that can be done remotely, just one in ten in the bottom bracket can say the same.

Pew Research found the divide extends to academic attainment as well: “About three-quarters of working-age adults with a postgraduate degree say they have worked from home as a result of the coronavirus outbreak, as do 62 percent of those with a bachelor’s degree.” Just 22 percent of workers with a high school diploma or less say they’ve worked from home.

What do members of academia, the healthcare bureaucracy and national media outlets have in common? They tend to be well-educated and relatively affluent. And they tend to be dismissive toward people advocating for a swift return to economic normalcy.

For many of them, the debate over re-opening the economy isn’t as urgent because their workplaces never closed. Millions of their fellow Americans fear that, if the shutdown doesn’t end soon, their corner of the economy may never re-open.