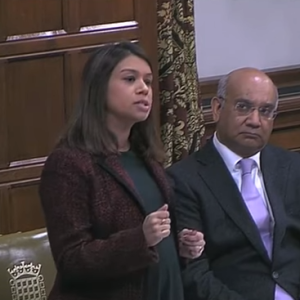 Labour MP Tulip Siddiq, who is Muslim, was among those in Parliament calling for Trump to be banned from Britain.
News

In the end, it was all for show.

The British Parliament didn’t end up voting Monday to ban Republican presidential front-runner Donald Trump from entering the United Kingdom as a result of his “hate speech.”

And it was no surprise, given that Prime Minister David Cameron, a Conservative, and Labour Party leader Jeremy Corbyn were both against the proposed move.

But the absence of a vote didn’t stop Parliament’s three-hour debate over a Trump ban from generating international media frenzy. In fact, the spectacle was only bumped from the headlines on Tuesday, when the endorsement of former GOP vice presidential candidate Sarah Palin ensured Trump’s domination of another news cycle.

Yet as reporters marveled at the London proceedings — lawmakers from America’s closest global ally inveighing against a leading White House contender over his rhetoric against Muslims, Mexican immigrants and other minorities — much of the coverage neglected an underlying story.

Britain’s policy of banning individuals the government deems “not conducive to the public good” stands in stark contrast to the American tradition of free expression. What’s more, it demonstrates a growing culture of speech suppression in the service of multiculturalism with direct relevance to U.S. debates over “political correctness” and the First Amendment.

Since 2005, the United Kingdom has banned at least several hundred people — and maybe more, considering the exact numbers aren’t public — under a government policy excluding individuals deemed not “conducive to the public good,” according to the BBC. Some are barred because they’ve committed crimes. Others are kept out simply for what they’ve said. The list of Americans banned includes National Security Agency whistleblower Edward Snowden, conservative talk radio host Michael Savage and the late Westboro Baptist Church pastor Fred Phelps, whose virulently anti-gay organization is widely viewed as a hate group.

There’s no doubt these people are controversial. Many would use stronger terms to describe them. It’s also possible that some of their rhetoric could inspire violence at home or abroad.

But that’s not the standard America uses for expulsion or censorship. There’s a long national tradition of permitting incendiary speech, as long as it doesn’t urge harm to others directly. The United States would never stand for expelling the San Francisco-based Savage, for example, whose show reached an estimated 10 million listeners at its peak.

Savage’s case is jarring for another reason as well. Cameron’s government maintains the ban on the talk show host can be lifted only if he recants on-air statements, deemed threatening to national security. But as the Daily Mail reported, “the U.K has never specified which comments it found so dangerous.”

How is Savage supposed to make make amends if he doesn’t know what he’s apologizing for? And why hasn’t the public been given any explanation of what specifically caused the ban?

For his part, the host has always said Britain’s actions are an egregious affront from the land of the Magna Carta — and he has completely rejected the notion that he’s a security threat of any kind.

“I have never advocated violence,” he told the San Francisco Chronicle in 2009. “My views may be inflammatory, but they’re not violent in any way.”

The question of whether Trump’s rhetoric incited violence was central to Parliament’s debate. When Labour MP Tulip Siddiq argued for banning the Republican, she held him responsible for violence against Muslims toward the end of last year. She also cited the Boston beating of a Hispanic homeless man, in which police said one assailant justified his actions by saying “Donald Trump was right — all these illegals need to be deported.”

“[His] words lead to real crime and violence,” Siddiq said of the presidential candidate. “That is where I draw the line on freedom of speech.”

Other MPs drew the line elsewhere. “It is perfectly right that the [government] bans extremist preachers when they tell their followers to commit acts of terrorism and to cause harm and pain to individuals and communities, and ultimately to kill,” said Conservative Steve Double. “However, I do not believe that Mr. Trump has done that.”

“I wonder how long the list would be if our country began to ban people because they said things we did not like,” he added.

The debate came amid growing concern about free speech in the United Kingdom. As Reason detailed, British citizens have been jailed and investigated by the police for writing offensive remarks on Twitter or even using hashtags the government disliked. Joke-telling can get you arrested. Advertisements deemed off-putting to Christians, feminists and public health advocates can be ripped from the public square.

“[N]o zone of British life,” wrote contributor Brendan O’Neill, “is free from the peering eyes and always primed red pen of the new censorious set that longs to scribble out or shut down anything dodgy, eccentric, hateful, or upsetting (to some).”

It’s a notable trend, if nothing else — especially as many Americans are now grappling with debates over “political correctness” emerging primarily on college campuses. Accusations of censorship in these battles have primarily concerned private institutions and individuals, so government policing hasn’t been involved. Still, Britain’s experience could be a glimpse of the future, playing out across the pond.