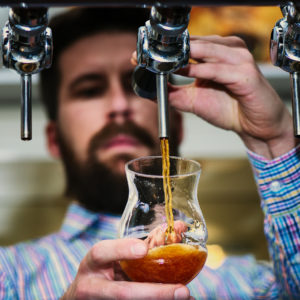 Beer Industry on the Brink

“You’re probably going to get fat.” These were some of the many words of warning handed out by Liquid Mechanics CEO Davin Helden during his talk on what it takes to start a craft brewery in the United States today. Other nuggets included: “My first suggestion is to hire a lawyer,” and “you will drain your savings accounts and 401(k)s” despite working 70 hours a week.

Helden — who proudly announced that he was finally off Medicaid now that his brewery had grown to a sufficient size such that he could afford health insurance — wasn’t the only person sounding a note of caution at this year’s Brewers Association Craft Brewers Conference. Numerous panel speakers cited the possibility that America’s craft-beer market is oversaturated. The Brewers Association’s chief economist, Bart Watson, told brewery owners to get used to slower growth trends, even though craft beer continues to expand its share of the beer market.

With the number of breweries in the United States now topping 5,000, competition in the beer market has grown fierce. Brewers increasingly look for any advantage or leg-up they can find to distinguish themselves from the crowd. From a policy perspective, this makes rational and market-friendly beer laws more important than ever, since the more time brewers spend trying to comply with frustrating laws and regulations, the less time they have to brew and to grow their brands.

When it comes to regulatory issues, the conference showed that brewers are engaged. The numerous regulatory seminars were among the most well-attended sessions and featured extensive Q&A sessions in which brewers quizzed regulators on the detailed ins-and-outs of reporting requirements, tax filings and compliance issues.

However, the most dramatic moments involved discussions about the three-tiered alcohol-distribution system and the relationship between brewers, wholesalers and retailers. Although most brewers I talked to at the conference were quick declare their support for wholesalers — many of whom they count as friends — it’s clearer than ever that the antiquated three-tier system needs to be revamped.

The three-tiered structure — a vestige of the post-Prohibition 1930s — mandates that producers, wholesalers and retailers remain separate legal entities. In many instances, it forces brewers to contract with wholesalers when selling their beer. Those coerced middleman relationships are almost wholly unique to the alcohol industry. Unsurprisingly, this model has had trouble fitting into a modern marketplace rife with brewery-owned taprooms and brew pubs.

Despite the fact that this antiquated legal structure no longer coheres with modern realities of the beer market, wholesalers remain committed to the model because it grants them de facto monopoly power over beer distribution within their geographical regions. In defending the three-tiered system, wholesalers invoke a parade of horribles they claim would ensue were the system scrapped and brewers allowed to sell straight to customers and retailers.

But as was pointed out during a particularly fascinating exchange between DCBeer.com contributing writer Greg Parnas and the National Beer Wholesalers Association’s Paul Pisano, the District of Columbia’s legal structure functions well despite avoiding many facets of the three-tiered system. Unlike in most states, retailers in the District can import beer straight from producers. D.C. also lacks restrictive franchise laws that lock brewers into bad contracts with wholesalers.

Perhaps the biggest looming threat to the three-tiered system is the proliferation of on-premise taprooms. Most breweries sell close to one-third of their beer on site, which makes these sales a significant part of their business models. Right on cue, increasing resistance has cropped up among wholesalers and retailers leery of any efforts by brewers to sell their brews directly to consumers.

One panelist even likened the taproom battle to a coming Cold War, pitting wholesalers and retailers against brewers in state legislatures across the country — as was recently seen in Maryland when brewers sought to raise the on-premises sales cap.

Whether states will enact reforms to allow breweries to sell more of their beer directly to consumers remains to be seen, but the presentations at the Craft Brewers Conference demonstrated that the three-tiered system is struggling to keep up with the realities of the modern beer world. Sooner or later, change is coming.

When referring to the beer industry near the end of one of his panels, Pisano quipped, “It’s a regulated industry, not a free market.” Maybe so, but the trend seems to be toward more freedom. In today’s hypercompetitive beer market, hard-working brewers may just start demanding it.