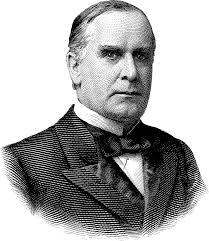 Before Biden’s Basement, There Was McKinley’s Front Porch

Like a hibernating animal creeping from its lair in spring, Joe Biden is popping out of his basement more and more.

The COVID-19 quarantine proved a godsend for the gaffe-prone Democratic standard-bearer. It gave him an excuse to hunker down at home and control his messaging.

But with Election Day now six weeks off, he can’t afford to stay in America’s most celebrated subterranean sanctuary much longer. Which is why we’re seeing him on the campaign trail more often.

While 2020’s crazy campaign twists may feel unprecedented, there’s nothing new about a candidate using their homes to political advantage. For several, it helped them trade up to that big white mansion in Washington.

In the republic’s early years it was thought unseemly for would-be presidents to seek the job. The presidency was considered a gift awarded by the people, not a prize to win in competition.

But presidential candidates are often masterful politicians. Many, including Abraham Lincoln, James Garfield and Benjamin Harrison, waged winning campaigns from the privacy of their home.

However, it took a lackluster Civil War veteran to turn it into an art form.

A former Union army major, congressman, and Ohio governor, William McKinley became the Republican nominee in 1896. He was the kind of drab guy you’d meet at a Rotary meeting.

His Democratic opponent was William Jennings Bryan. And that posed a serious problem for the GOP.

Bryan was a silver-tongued orator who could charm birds out of the trees with his flowery speaking. In fact, the former congressman and failed Senate candidate from Nebraska unexpectedly won the nomination after delivering his “Cross of Gold Speech” at the Democratic convention, considered one of the most remarkable pieces of oratory in political history.

Bryan promised to deliver more of it — lots more. Nicknamed the “Boy Orator of the Platte” (he was only 36), Bryan scrapped precedent and took his act on the road. Roaring into the campaign with youthful enthusiasm, he addressed big city crowds and clumps of people at country crossroads while racing around the country in a frenzy.

He was a populist who wanted to scrap the gold standard and make big corporations pay higher taxes; a Victorian Bernie Sanders, if you will.

McKinley’s campaign manager leapt into action in response. Mark Hanna was a no-nonsense millionaire who relished playing political hardball. Think of him as Karl Rove in a frock coat. He developed a two-prong strategy to elect McKinley.

First, Hanna shook down corporate CEOs for big bucks. They didn’t need much persuading. Terrifying by the financial hit they would take if Bryan won, money was showered on McKinley’s campaign in record-setting levels. Hanna spread it around lavishly, widely, and wisely.

He also had McKinley stay home in Canton, Ohio, which the candidate eagerly agreed to do. Hanna knew McKinley couldn’t match Bryan’s speaking skill, so why run around the country trying? But there was another, deeply personal reason. McKinley was passionately devoted to his wife Ida, an epileptic.

Lengthy travel was unwise for her, and McKinley couldn’t bear being apart from her for long. So, he campaigned from the family home on Market Avenue instead.

It turned out to be a masterstroke. Hanna arranged for delegates from different groups to call on McKinley: young Republicans, business associations, and even temperance societies came calling — with Hanna picking up their travel tab from his abundant war chest. More than 700,000 visited over several months.

When it proved difficult to squeeze so many people inside McKinley’s house, someone came up with a brilliant idea: the candidate spoke to each group as they gathered on his front lawn front his large, old-fashioned front porch and shook hands.

Folks went home and talked about what a great guy McKinley was while reporters got a new story every day without exhausting themselves following the candidate cross-country.

The result? McKinley eked out a 51 to 46.7 percent popular votes win while scoring a landslide in the Electoral College.

Warren Harding repeated the front porch strategy for his own victorious campaign in 1920.

Based on the polls, Biden’s basement version of the front-porch campaign is working well.  And the latest reports show he’s got a significant fundraising lead over President Trump as well.

Want to be elected president? Staying home, it seems, leads to the White House.

Raking in a ton of cash doesn’t hurt, either.