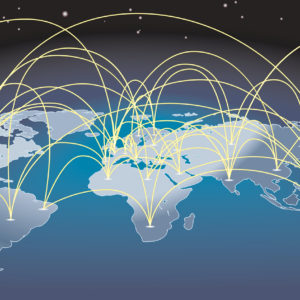 The energy landscape is being transformed by improved oil and gas extraction technologies. But governmental policy prohibiting the export of crude oil from the United States is limiting the benefits of American ingenuity.

The 1973 Arab oil embargo prompted President Jimmy Carter to sign the Export Administration Act of 1979, which banned crude oil exports supposedly to keep oil industry jobs here at home. That plan backfired. Over the next 30 years, oil production dropped steadily from 10,000 barrels to 5,000 barrels per day. As new technologies, including hydraulic fracturing (“fracking”) and horizontal drilling, have come online, production has climbed up to 8,000 barrels per day this year.

Oil refineries operate 24 hours a day, 365 days a year and require large numbers of workers to run. With a recovery in oil exploration and refining, Americans have benefited from more jobs, increased wages, and greater efficiency. However, the federal government has limited U.S. prosperity significantly by restricting crude oil exports.

Free trade is a key to sustained economic growth. Consumers are better off because the unhampered international movement of tradable goods gives them access to more, better and cheaper products than under a system in which every country tries to be self-sufficient. Like any voluntary domestic transaction, two countries will participate in global markets only when both parties benefit.

Looked at from the point of view of foreign buyers of goods produced in the United States, labor and capital can be freed up by purchasing products in which we have a comparative advantage (i.e. we can supply the good at a lower cost than our trading partners can). This increases productivity, economic growth and well being for all. Foreign purchasers of U.S. crude oil must pay in dollars, which will strengthen our currency on world markets. Moreover, our exports help pay for our imports.

Entering into the global market will mean more competition, which triggers innovation in order for businesses to remain viable. Innovation leads to higher quality products at lower prices, and improved standards of living overall. Free trade has lifted millions of poor people out of poverty, as we have observed most recently in the opening of China. When foreign companies are the low-cost producers, Americans have the opportunity to import the goods for less. To be clear, when international markets are unrestricted, trade expands, along with opportunities for creating wealth, investment, and jobs.

The key virtue of free trade, recognized as long ago as Adam Smith, is that both the importer and exporter can engage in mutually beneficial exchanges, which is advantageous to producers and consumers alike. In the case of crude oil, U.S. refineries are operating at close to full capacity while oil reserves continue to grow. Other countries like India and China can increase refinery throughput, but only if they import more crude oil from us or extract more of it at home.

The Export Administration Act allows us to export refined petroleum products, such as gasoline, heating oil and aviation fuel, but it is safer and more sensible to export crude oil for refining elsewhere, given the limits on refining capacity here.

Because of President Carter’s export ban, the benefits of freer trade in the energy sector stay just beyond our reach. Lifting the oil export ban will open up greater trade opportunities, increasing productivity and global prosperity.