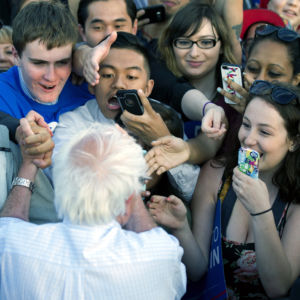 Still Berning: Sanders Campaigns in D.C. Amid Calls for Him to Quit

The young woman with dreadlocks and purple lipstick crouches low to the ground, resting. To her right, a couple hoists a flag with marijuana leaves on it — some not-so-subtle advocacy for legalizing pot. No one’s talking much, so it falls to the precocious toddler with copper hair and a tie-dye shirt — the cute kid perched on his father’s shoulders — to say what they’re all thinking: “Bernie Sanders, where are you?”

The short answer is, he’s coming. It’s a warm Thursday evening in southeast Washington, D.C., where the sun is dropping in the sky over a parking lot near the D.C. Armory. Simon and Garfunkel are on the sound system — “They’ve all come to look for America” — and a crowd of thousands has come too, for what could be the final rally of Sanders’ insurgent Democratic bid for the White House.

The socialist Vermont senator surpassed most everyone’s expectations this year, winning 22 states and 10 million votes in his primary race against Hillary Clinton, now the party’s presumptive nominee. Buoyed by his sharp critique of “establishment politics” and the various “rigged systems” of American life, Sanders’ campaign against inequality found remarkable success.

But tonight, two days after Clinton clinched the nomination, the pressure on him to drop out is escalated. Before midnight, endorsements for the former secretary of state will have poured in from President Barack Obama, Vice President Joe Biden and even Sanders’ ideological soulmate on the Democratic left, Massachusetts Sen. Elizabeth Warren. The collective message, in the words of Leo McGarry on the NBC political drama “The West Wing,” is that Sanders has had “a terrific ride — improbable, impressive and over.”

Not that the senator is willing to acknowledge it yet. Taking the stage, he delivers a standard stump speech, declaring his campaign “still standing,” just like Elton John. Then he urges voters to turn out for him next Tuesday, when the last primary is held in the District of Columbia. “It would be extraordinary if the people of Washington, our nation’s capital, stood up and told the world that they are ready to lead this country into a political revolution,” he says.

Regardless of Tuesday’s outcome, one thing’s certain: many of Sanders’ supporters are having a hard time with Clinton’s victory. Campaign surrogate and public intellectual Cornel West, who was appointed by the senator to the Democratic National Committee’s platform-drafting committee, tells the crowd Clinton is a “milquetoast neo-liberal sister.” Calling presumptive Republican nominee Donald Trump a “narcissist neo-fascist,” he adds, “we know the difference between a neo-fascist and a neo-liberal, so you make your own decision.”

For some Sanders backers, having people like West shaping the Democratic platform at next month’s convention is a silver lining to their loss. “As long as the platform has a lot of progressive parts to it, I think most Democrats will then follow through and vote for Hillary,” says Maryland Democrat Mark English after the rally.

Another Old Line State voter, University of Maryland student Nora Alshareef, says she’ll probably support Clinton, but only out of fear of Trump. “It comes down to who’s the bigger threat, and Donald Trump’s definitely the bigger threat,” she says.

Until next week, though, 2016’s big progressive movement is suspended in time. As ralliers make their way home Thursday, the sun finally sets. A few “Feel the Bern” t-shirt sellers remain on one sidewalk, but they no longer have any customers.

This, quite literally, is the revolution in twilight.