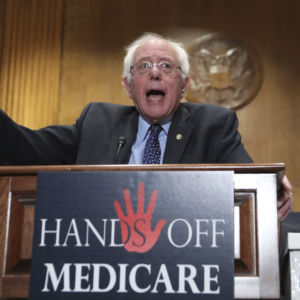 Sen. Bernie Sanders discussed the need for a single-payer healthcare system Friday to a crowd of nurses during their annual union convention in San Francisco.

Sanders is a self-described democratic-socialist who made a notable but failed attempt at becoming the presidential candidate for the Democratic Party during the 2016 election. The National Nurses United (NNU) was one of the few major unions to endorse him.

Sanders argues that nurses and hospitals are often prevented from doing their jobs when people don’t have health insurance. He introduced a bill Sept. 13 that would expand Medicare to all Americans. He also denounced recent attempts to reform the health insurance system by Republican President Donald Trump and Congress.

“How can you do your job well when people walk in the door and have no health insurance to pay for the therapies, procedures, and medicines they need,” Sanders said. “And that is why the National Nurses United has been leading this country in the fight for a Medicare for all, single-payer system. Thank you nurses.”

Sanders has become a leading voice on issues important to unions like the $15 minimum wage. He has also made healthcare a central focus. His proposal is designed to expand Medicare coverage to all Americans. The bill would effectively create a single-payer system, which has been a major policy goal for many progressives.

“Today the immediate crisis we face from Trump and the Republican leadership is another piece of horrific legislation that would throw 32 million Americans off of the healthcare they currently have,” Sanders said. “How cruel, how immoral it is, to say to those millions of Americans, we are going to take away that health insurance that keeps you alive.”

Republicans have also made healthcare a focus on their agenda in order to fulfill their biggest campaign promise. They have said throughout the last administration that they would repeal and replace the Affordable Care Act, better known as Obamacare. But that promise has not come true despite several attempts since the last election.

Republicans are currently considering a bill from Sens. Lindsey Graham and Bill Cassidy designed to provide states more control over their local health insurance markets by block granting federal funds. Sanders argued the bill would put thousands of Americans at risk of dying every year from a lack of health insurance.

“This particular proposal, the so-called Graham-Cassidy bill, would be especially devastating for those states like Vermont and California that have done the right thing by expanding Medicaid,” Sanders said. “In California alone, you would lose over $55 billion in federal healthcare money.”

Medicare is a national social insurance program administered by the federal government. It currently covers people that are at least 65 years old who have paid into it through their payroll taxes. It also covers people with certain disabilities. California Lt. Gov. Gavin Newsom also argued in support of expanding it during the convention.

The NNU has not been afraid to break with other unions to support more progressive policies. Democrats introduced a new economic agenda July 24 which most major unions were quick to endorse. The NNU, in contrast, expressed dissatisfaction with the agenda for not including things like single-payer healthcare.

Sanders has gained a significant and passionate support base over the past couple of years. But the policies he supports have also attracted a lot of negative attention. Republicans argue policies like single-payer healthcare will lead to increased costs and less flexibility for coverage options. The Heritage Foundation, a conservative think-tank, recently warned his single-payer healthcare bill would lead to disaster.

The NNU hosted the convention alongside its affiliates the California Nurses Association and the National Nurses Organizing Committee.