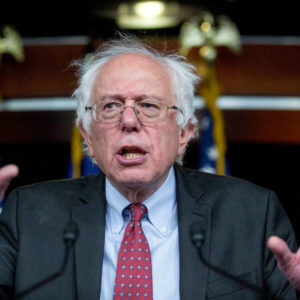 “China is an authoritarian country, becoming more and more authoritarian,” Sanders said during a CNN town hall meeting Monday night. “But can anyone deny, the facts are clear, that they have taken more people out of extreme poverty than any country in history?”

He made the same point in an interview with The Hill last August.

The implication was obvious: An authoritarian, socialist country had achieved the world’s most impressive economic growth. So socialism has its virtues.

Hundreds of millions of Chinese have escaped extreme poverty, but Sanders has the characterization exactly backwards. China’s embrace of socialism after World War II trapped historic numbers of people in poverty while much of the rest of the world grew. The country’s rapid growth of the last four decades was ignited by the government’s switch from socialist economic planning to market capitalism.

“Since China began to open up and reform its economy in 1978, GDP growth has averaged almost 10 percent a year, and more than 850 million people have been lifted out of poverty,” begins the World Bank’s overview of China’s economy.

The growth trigger was “open up and reform.”

China experienced economic growth after World War II, but the forced collectivization of Mao’s “Great Leap Forward” (1958-62) destroyed internal markets, devastated agricultural production, placed industrialization under the direction of party officials (to keep it out of the hands of capitalists), and suppressed private business activity.

The Cultural Revolution (1966-76) sent the economy into decline again. Mao died in September of 1976, and China’s remaining leadership was left to clean up the devastation.

As a result of China’s failed efforts at central planning, “by 1978 nearly three-fourths of industrial production was produced by centrally controlled, state-owned enterprises (SOEs), according to centrally planned output targets,” the Congressional Research Service detailed in a 2019 report.

“Since most aspects of the economy were managed and run by the central government, there were no market mechanisms to efficiently allocate resources, and thus there were few incentives for firms, workers, and farmers to become more productive or be concerned with the quality of what they produced (since they were mainly focused on production goals set by the government).”

After Mao’s death, China’s leaders found themselves in charge of a Third World country. Regional rival Japan — with an economy rebuilt along the U.S. model after the war — had since left massive, once-powerful China far behind.

In December of 1978, party leadership officially broke with Maoism, shelved the party’s commitment to class struggle and concentrated the state’s resources on economic growth.

The slogan “class struggle is the key link,” adopted before the Cultural Revolution and reaffirmed by Mao in 1976, was discarded. Deng Xiaoping, Mao’s successor, announced in a party conference speech at the end of 1978 that the new task was to “emancipate our minds, use our heads, seek truth from facts.”

That was a direct and unmistakable repudiation of Marxist economic dogma. Deng abandoned the failed attempt to force economic equality through socialist economic direction. In its place, he ordered the introduction of market-based economic incentives.

Socialism had always stood against the economic inequality created by capitalism. Deng announced that inequality would be accepted because it would make everyone more prosperous.

“In economic policy, I think we should allow some regions and enterprises and some workers and peasants to earn more and enjoy more benefits sooner than others, in accordance with their hard work and greater contributions to society,” Deng said. “If the standard of living of some people is raised first, this will inevitably be an impressive example to their ‘neighbors,’ and people in other regions and units will want to learn from them.

“This will help the whole national economy to advance wave upon wave and help the people of all our nationalities to become prosperous in a comparatively short period.”

The massive economic gains that lifted 850 million people out of poverty in the next 40 years were made possible by China’s abandonment of socialist economic planning and embrace of market economics. China’s government remains authoritarian, but Sanders is wrong that the country’s growth occurred as China grew more authoritarian. It is far less authoritarian today than it was under Mao.

How someone so interested in socialism has apparently managed to miss this widely reported story is a mystery.