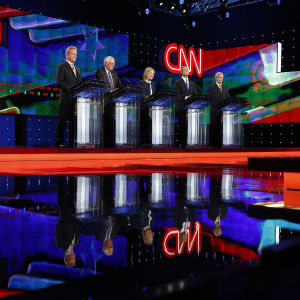 “I’d shut down what exists right now [which] is that virtually every telephone call in this country ends up in a file at the NSA,” Sanders told CNN’s Anderson Cooper. “That is unacceptable to me.”

The senate independent and self-described democratic socialist was referring to the bulk collection of all Americans’ landline telephone metadata records under Section 215 of the Patriot Act — a program scheduled to shut down in November, when it will be replaced by a new framework set down in the USA Freedom Act passed in the Senate earlier this year.

Sanders voted against the Freedom Act on the grounds the bill didn’t go far enough in reigning in the signals intelligence agency or protecting Americans’ digital privacy.

The Vermont senator didn’t go into specifics about what he would do differently to tackle bulk surveillance, but touted his past opposition to the Patriot Act when it went before Congress in the wake of the terrorist attacks on Sept. 11, 2001.

That put him at odds with fellow Democratic frontrunner Hillary Clinton, who said we need to “keep the balance of civil liberties and security,” and defended her vote for the Patriot Act.

“It was necessary to make sure that we were able, after 9/11, to put in place the security that was needed,” Clinton said. “What happened, however, is that the Bush administration began to chip away at that process, and I began to speak about their use of warrantless surveillance.”

While Clinton supported the Freedom Act, she did not have positive things to say about the man responsible for bringing the need for NSA reform to light — former National Security Agency contractor Edward Snowden, who she said should have taken advantage of whistleblower protections to raise the issue instead of fleeing to Russia and leaking sensitive intelligence documents, putting U.S. assets at risk.

“He broke the laws of the United States,” Clinton said. “He stole very important information that has unfortunately fallen into a lot of the wrong hands. So I don’t think he should be brought home without facing the music.”

Sanders agreed Snowden broke the law, but said by doing so, he brought an important issue to the national debate stage.

“I think that Snowden played a very important role in educating the American people to the degree to which our civil liberties and our constitutional rights are being undermined,” Sanders said.

“I think there should be a penalty to that,” he continued. “But I think that education should be taken into consideration before the sentencing.”

The cybersecurity issue most expected during Tuesday night’s debate turned out to be the most short-lived when Sanders told Clinton and Cooper he was tired of the investigation surrounding her use of a private email server at the state department taking the focus off important issues, like the shrinking middle class and Wall Street reform.

“The American people are sick and tired of hearing about your damn emails,” Sanders said. “Enough of the emails, lets talk about the real issues facing America.”

“Thank you, me too,” Clinton laughed as the two shook hands amid a roar of applause.

Before Sanders gave the quote of the night, Clinton repeated using the server was a “mistake” and that she’s “taken responsibility” for it.

“I am still standing,” Clinton said. “I am happy to be part of this debate and I intend to keep talking about the issues that matter to the American people.”

The debate comes days after Sanders came out against the Cybersecurity Information Sharing Act dividing the Senate over whether companies should be given legal protections to share cyber threat data with the government. Sanders and others worry that data could include personal information about users, and give intelligence agencies a new window for surveillance.

While numerous Republicans have staked out their stances on the issue, Sanders is the only Democratic candidate to formally take a definitive stance on CISA, which is expected to go before the Senate later this month.