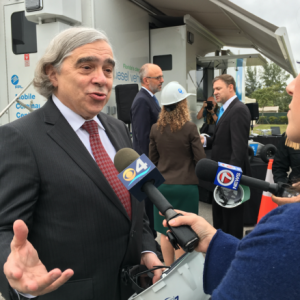 Beware of the Loving Embrace of the Government

I am not a government-basher per se. As a reporter, I have covered it too long to say the bureaucracy is always incompetent and lazy. But I have also seen how the government wastes money, veers from one project to another, and is indifferent to any damage done by its autocratic ways.

The government, for better or worse, is the great risk-taker on new technologies. As such, it has added immeasurably to the wealth of the nation, from the creation of the technologies that led to the fracking boom and the Internet to the creative advances one now sees in airliners.

After the Pentagon, the Department of Energy is the worst offender of the love-it-then-leave-it school of support for technology innovation.

The country is littered with the carcasses of abandoned projects, such as the Yucca Mountain nuclear spent-fuel repository, which was canceled by the Obama administration to please its political ally, Sen. Harry Reid, D-Nev. Price tag: more than $15 billion.

This cancellation has had two other damaging effects: the first is there is still no permanent place to store nuclear spent fuel, which is piling up in America; and the second is the demoralizing of talented engineers and scientists by the government’s vacillation. These effects may be as huge as the price tag.

Gifted people throw themselves into government projects and move their families across the country to the work sites. Then the government says, “Thanks for your work on the project, but we are canceling it. Now, shove off!” These contractor employees do not have government protections; they are subject to government caprice.

In South Carolina, for example, a huge project to build a plant to blend weapons-grade plutonium into nuclear fuel for civilian reactors is 70-percent completed and hanging by a thread. That is because after spending $5 billion, the Energy Department wants to do something else equally expensive, according to one consultant.

Or take Gen4 Energy, a small company based Denver that has been strung along by Energy and now is preparing pink slips. Its plan is to build a small (25-MWe), advanced nuclear power plant for use at mining sites, military bases and remote places that need electricity, such as Alaskan villages and those in less-developed countries. These reactors would work for 10 years and then would be swapped out and replaced with a new, factory-built module.

Robert Prince, Gen4 Energy’s CEO, who came out of retirement to lead the advanced reactor project, says it is a unique, safe design using tested materials and concepts. The Gen4 advanced reactor design was in the running for development funding from the Energy Department.

The department uses a device called a “funding opportunity announcement” (FOA) to encourage technology developers. In 2013, it issued an FOA and handed out grants of $1 million each to four advanced reactor designers: General Electric, General Atomics, Westinghouse and Gen4 Energy.

The department’s next step was to issue another FOA. This time, the department planned to split $80 million over 10 years for just two designs, provided the grantees came up with their own $10 million. Gen4 and the others prepared detailed proposals and waited.

In January, Energy picked two rector designs: one from a consortium that includes Bill Gates and the Southern Co., and the other from technology entrepreneur Kam Ghaffarian. Neither were in the first round.

The decision hit Gen4 Energy particularly hard, as it was the smallest contender and probably the one most in need of Energy help as it labored on its design, which had originated in the Los Alamos National Laboratory and was due for feasibility testing at the University of South Carolina, according to Prince. “We really thought we had a shot,” he said.

Not so. Love from the Department of Energy is a sometime thing. Just ask Prince, who now must tell investors and staff that the $10 million or so they have already spent is gone and the business must pack up, technology abandoned, lives shattered, hope sunk.

Gen4 Energy is not alone in its disappointment. Other companies with exciting designs for reactors are also disappointed. Careers, brilliant ideas and untold dollars are lost in the way Energy seduces and abandons people and technologies.