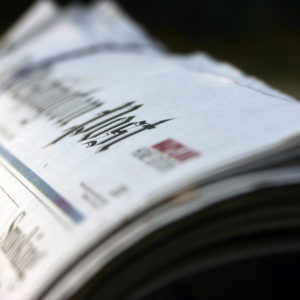 On December 19, Philip Bump, a political reporter for the Washington Post, announced a new project for the paper. Lamenting that President-elect Donald Trump’s tweets gained tens of thousands of shares, while Washington Post articles providing additional context were seldom read, Bump said that the paper was trying to solve the problem by developing a plug-in that would check Trump’s tweets “in real time.”

“We made a tool that slips a bit more context into Trump’s tweets,” Bump wrote. “Our goal is to provide additional context where needed for Trump’s tweets moving forward (and a few golden oldies).”

For each tweet, the Post publishes its comments under one of several headlines: “There’s important context missing,” “Just So You Know,” or the worst, “This is incorrect or fake.”

Though now available for both Firefox and Chrome, the plug-in is slightly clunky, requiring users to go to Trump’s twitter page and open the tweets one by one to see the fact checker’s remarks. Not all of Trump’s tweets have been fact checked, and the selection of those that have seems slightly random. Although the Post claims to be trying to present just the facts, the new plug-in frequently seems to be playing gotcha with Trump. For example, it did not check Trump’s tweet that he had gained votes in the Wisconsin and Pennsylvania recounts, even though it was correct. 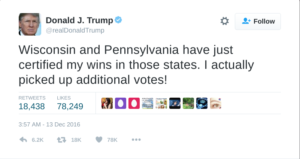 The editors of the plug-in are also hesitant to credit Trump with impacting consumer confidence. On Tuesday, a tweet boasting that the U.S. Consumer Confidence Index jumped four points in December was given a “Just So You Know,” stating that a similar Gallup survey “saw an increase after the election thanks primarily to improved opinions from Republicans.” 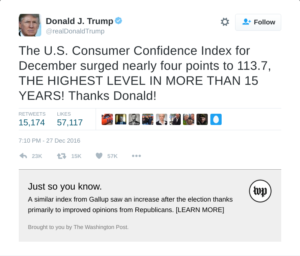 The fact check does not reference the same survey or data Trump referred to.

And after Trump tweeted on December 26 about how “the world was gloomy” before his election success, but that both the markets and Christmas spending rebounded after his win, the fact checkers also went after his causal link. 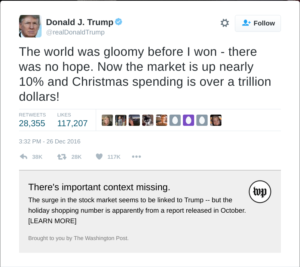 The Post allows that the stock market surge, which began immediately after the election in November, “seems to be linked to Trump.” (Ironically, a Post story on Wednesday wrote of how “all four major U.S. stock indexes are preparing to finish the year in record territory, thanks in part to a post-election bump from optimism about the new president who takes office in 23 days.”)

It is less willing to credit the $1 trillion figure for Christmas sales, implying that it is outdated and “apparently from a report in October.” Still, Forbes used the same figure in a piece earlier this week, citing a report from a retailer group.

Even more bizarrely, the plug-in even stooped to fact checking a hypothetical. In a podcast just after Christmas, Obama said that he thought he could have beaten Trump, had he been allowed to run.

Trump’s reply was brash: “He should say that but I say NO WAY!” 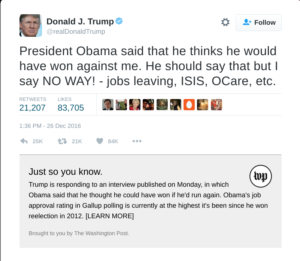 In response, the Post supplies the context of Obama’s original statement, before noting that “Obama’s job approval rating in Gallup polling is currently the highest it’s been since he won reelection in 2012.”

Still, the question remains hypothetical and even liberal columnists disagree as to what the results of such a race would have been.

“As a liberal, it pains me to say the following: President Barack Obama believes he would have beaten Donald Trump, but he’s probably wrong,” wrote Politico contributing editor Bill Scher on Wednesday.

So far, 29,870 people have added the plug-in to their Chrome browsers, making it far more popular than “Trump Tariff,” Bump’s previous foray into web plug-ins, which sought to show users what their online shopping would cost under Trump trade policies.

The fact checking add-on continues to be updated several times a day with stories spinning off of Trump’s tweets. Bump wants to keep the project running through the entirety of the Trump presidency.