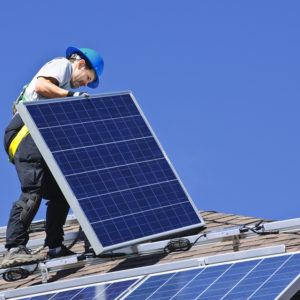 President Joe Biden has made two commitments on green energy. One is to dramatically increase the use of green tech like electric vehicles (EVs), windmills and solar power. The other is to build that new tech here in America.

“There is simply no reason why the blades for wind turbines can’t be built in Pittsburgh instead of Beijing,” Biden said during his State of the Union address. And he wants half of all new cars sold in 2030 to be EVs, too.

But there;s at least one reason why these products can’t be built in America: Minerals.

Production of green tech, like batteries for EVs, relies heavily on minerals such as lithium, cobalt, nickel and copper.

The solution, said Ashley Burke, senior vice president for communications at National Mining Association (NMA), is to increase domestic production. “When you talk about made in America, those materials and those things that are made in America should also be mined in America as well,” Burke said.

But the Biden administration appears to be at cross purposes on the issue. Just days ago, the Environmental Protection Agency (EPA) recommended the U.S. Army Corps of Engineers withhold a permit needed for PolyMet Mining to open a mine in northeastern Minnesota. According to the company, there are 290 million tons of copper and nickel, as well as “marketable reserves of palladium, platinum, and cobalt,” one of the richest deposits in the world.

Republicans in Congress said the EPA’s decision is a blow to U.S. interests and a win for China.

“These anti-mining policies will make America even more dependent upon the Chinese Communist Party for critical minerals,” said House Committee on Energy and Commerce Ranking Member Cathy McMorris Rodgers (R-Wash.) “Critical minerals – like the copper, nickel, and cobalt promised by this Minnesota mining project – are desperately needed for our energy sector and should be produced, processed, and manufactured here in the United States.

“If President Biden is serious about securing our supply chains for critical minerals, particularly for the energy sector, he will prioritize the permitting of mining projects in America. Otherwise, he will be ceding control over these supply chains to China.”

The White House announced in March it would use the Defense Production Act to promote the development of U.S. resources and help with supply chain issues. But unless the president streamlines permitting, Barrasso said, we should “not expect to see any meaningful increase in American mineral production.”

“It is clearly time for us to get serious about expanding domestic mineral production,” Barrasso added.

Meanwhile, demand for metals and minerals is only going up.

“Copper demand is going to skyrocket,” said Burke. “In addition to lithium, cobalt, graphite, nickel, these are all things we have here in the United States, and depending on who you’re talking to, demand for those minerals that are really key to electrification, EVs, our energy future, that’s going to explode you know between 500 to 1000 percent by 2040.”

Merrill Matthews, Ph.D. of the Institute for Policy Innovation says he believes going after more U.S. resources is not only possible but can also be done quickly.

“If President Biden wants to ramp up investment and production of cutting edge, affordable battery technology that can power electric cars and store energy from intermittent renewable sources like wind and solar power, he needs to imitate Operation Warp Speed,” said Matthews. “That was the program created under President Trump to develop a COVID-19 vaccine in record time, (and) Operation Warp Speed relied on the private sector to solve the technical problems, create the supply chains, and produce the product, with the government tracking the progress while removing regulatory roadblocks.”

“One of the things about mining is that it doesn’t happen overnight, with the flip of a switch,” said Burke. “It takes a long time to stand up a mine and that’s one of the reasons that we are so focused on really streamlining that permitting process because — when you look at where we are in the United States — it takes about 7 to 10 years to stand up a mine here.”

Nations such as Canada and Australia can do it in two to three years.

“We’re just not doing well enough in making the best use of the natural resources that we have here,” said Burke. “We can and should be doing it better, faster here in the U.S. while maintaining all the rigorous environmental standards that we have.”

Some environmental groups and activists are not in favor of mining. The concerns involve what it does to landscapes, water sources, and wildlife. Still, Burke said mining can and should be done in the United States

“There is just so much that can be done to streamline this while keeping all of the rigor in the process,” Burke said.