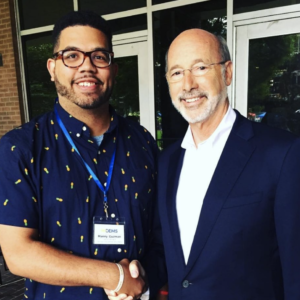 A Democratic candidate for the Pennsylvania House, who is also an adviser to the Joe Biden presidential campaign, has a history of sexist and misogynistic tweets referring to women as “hoes” and “b*tches,” a review of his Twitter account by InsideSources reveals.

Manuel Guzman Jr., is the Democratic nominee for Pennsylvania House District 127 in Berks County, having beaten  second place finisher, Robin Costenbader-Jacobson by about 600 votes. He will face Republican Vincent Gagliardo Jr. in November.

An InsideSources review of his Twitter account found numerous tweets in which Guzman referred to women as “hoes,” racially charged commentary and suggestions that violence against women is acceptable.

One tweet used a particularly misogynistic hashtag to refer to a woman’s sexual organs.

“Got damn this girl in front of me got wayyyy to much f***ing perfume on. Like damn mami, if you gotta put that much s*** on #stinkyvag” he tweeted in 2011.

Other tweets from Guzman included the messages “Ungrateful ass b*tches,” “These hoes the same all they change is their outfits,” and “The next b*tch say I look like Drake getting slapped!”

That wasn’t the only reference to violence against women. In one tweet, Guzman appears to argue that hitting a woman is acceptable in some circumstances.

“Wait so let me get this straight, so it’s ok for you to punch me in the b*lls but it’s a big deal when I punch you in the leg? Ahhh women,” he tweeted in 2011.

Guzman also made problematic statements regarding race, tweeting about Asians and “white Hispanics.”

“@PaulKeldsen my favorite Asian. I’d like to place an order: fried cat with French fries.”

“What the hell is a ‘white Hispanic’ ? It’s either you’re Latino or you not.”

The phrase “white Hispanic” entered the national conversation in the wake of the Trayvon Martin shooting. George Zimmerman, who was acquitted of murder in the case, identified as Hispanic (his mother was from Peru), but he was described in some media outlets with the rarely-used phrase “white Hispanic.”

After InsideSources contacted Guzman for comment, he declined to respond. However, he did switch his Twitter account to protected status, meaning only approved followers can see his tweets.

InsideSources has also requested comment from the Pennsylvania Democratic Party and the Biden campaign.