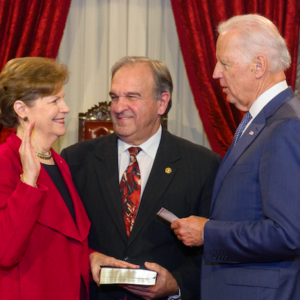 Biden Flip-Flop Lands Him Next to Shaheen, Kuster on Taxpayer-Funded Abortion

If anyone doubts Joe Biden’s ideological agility after 50 years in politics, his turn-on-a-dime twist over taxpayer-funded abortion should settle the question.  In one month, Biden has gone from being a lifetime opponent of forcing taxpayers to pay for the controversial procedure; to pledging to end the Hyde amendment that allows such funding; to reversing himself and opposing the tax funding yet again; before pledging to reverse his reverse and ensure tax dollars will go to abortions.

It took less than 24 hours of pushback from Planned Parenthood and Co. for Biden to (for the moment) abandon a fundamental belief he’s held (off and on) since at least 1976 about protecting pro-life Americans from funding a procedure they believe is murder.

On the same network Wednesday night, Biden was “a deeply religious man… he is guided by his faith,” according to his campaign co-chair Cedric Richmond, “and his position on the Hyde Amendment has been consistent.”

By Thursday night, Joe Biden was solidly in the camp of Cecile Richards and Ilyse Hogue (of Planned Parenthood and NARAL, respectively). Not to mention New Hampshire’s Sen. Jeanne Shaheen and Rep. Annie Kuster, both of whom are sponsoring a bill to repeal the Hyde amendment’s restrictions on tax money going to abortion.

Many New Hampshire voters are still surprised to learn just how far-from-moderate Sen. Shaheen’s views on abortion are. Not only does she support tax funding for the procedure, but she also supports that funding for abortions up until the day of delivery–no restrictions on how late in the pregnancy a doctor can perform the procedure.  When she was governor, Shaheen signed a law ending any state restrictions on abortion.

Interestingly, Shaheen’s “abortion on demand with no restrictions” stance isn’t even controversial in the modern Democratic party.

This is one reason Biden was always likely to bail on the Hyde amendment, despite a majority of Americans repeatedly telling pollsters they support it. There’s simply no room in the Democratic Party of 2019 for moderation on the abortion issue.

Some observers believe this is a sign Biden’s willing to do whatever it takes to win the nomination.

Others, like National Review’s Jim Geraghty, say it raises a different question: “Is this the move of a guy who’s up by 20 points, who’s the giant front-runner ahead of the field?” Geraghty asked in his podcast today.  “For a guy who’s supposed to be enjoying a huge lead, flip-flopping on taxpayer-financed abortions is a panicked move.”

New Hampshire moderates hoping Biden would stand up to the more extreme forces inside their party and help them claim the middle ground in November’s election have to ask themselves: If Biden won’t take a stand against Sanders/Warren/AOC when a majority of Americans are on his side…when will he?