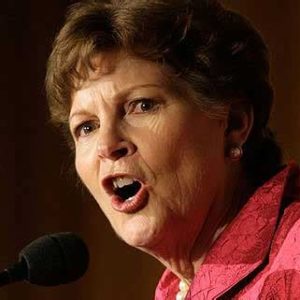 For weeks a conservative PAC has been running ads in New Hampshire attacking Sen. Jeanne Shaheen’s “extreme” position on abortion.  Whether that’s an effective attack in one of the most secular states in the country remains to be seen, but the Granite State Senator certainly has a record outside the American mainstream.

In 1997 when she was Governor Shaheen, she signed the laws making abortions legal in New Hampshire up to the day of birth.

According to polls by both YouGov and Marist, Americans overwhelmingly oppose allowing such late-term abortions, and more than two-thirds of Americans oppose third-trimester abortions entirely. Sen. Shaheen’s record is far beyond that.

Then in February, Sen. Shaheen took it one step further, going to the Senate floor to oppose the “Born Alive Abortion Survivors Protection Act (Born Alive Act). The bill would have made it illegal for a doctor to deny life-saving medical treatment to an infant who survived an attempted abortion.  Shaheen called mandated health care for a newborn under these circumstances “an obstacle to a woman’s constitutionally-protected right to make her own choices.”

Polls show Americans overwhelmingly disagree with Shaheen’s position, one that she shares with her New Hampshire colleague Sen. Maggie Hassan and the 42 other Democrats who voted against the Born Alive Act.  This debate was highlighted by other political debates like the vote in New York to essentially adopt New Hampshire’s “no-time-limits” abortion policy and Virginia Gov. Ralph Northam’s on-air explanation of how the abortion law he supported would allow infanticide.

Setting aside the difficult moral and ethical questions raised by the abortion issue, these events put pro-life Republicans in an advantageous political position.

Alabama’s new law effectively bans all abortions by establishing the legal personhood of unborn children. In doing so, it goes even further than neighboring Georgia with the so-called “heartbeat bill,” banning abortion once the unborn child has a detectable heartbeat, usually around six weeks. Alabama’s law also excludes exceptions for women who are victims of rape or incest.

Pro-life advocates believe that abortion is murder and so it’s no surprise they want to abolish it entirely. Their political problem is the vast majority of Americans don’t agree, and they see the abolitionist position as extreme. The same polls that show most Americans reject Sen. Shaheen’s position also find just 18 percent support a total abortion ban. Americans by a 2-to-1 margin support legal abortion in the first trimester.

On the life issue, Republicans in Alabama, Georgia and now Missouri have matched extremism with extremism. By doing so, they’ve handed a win to pro-choice senators in blue and purple states like Sen. Shaheen. 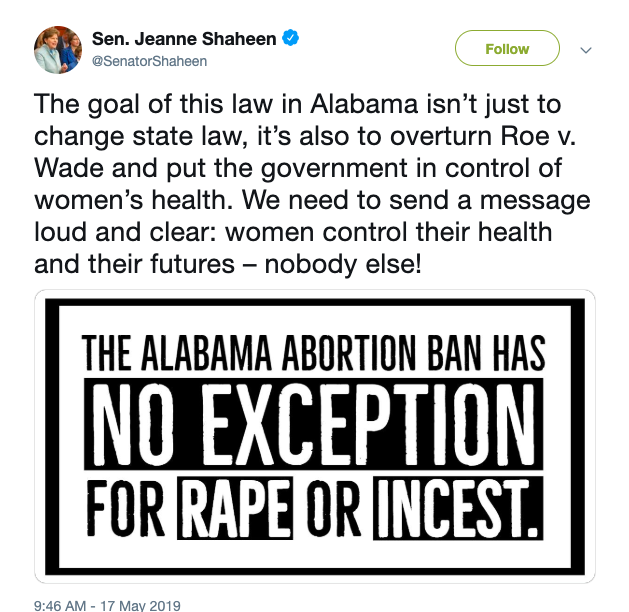 Given how far out on the fringe she is, Shaheen should be dodging the abortion issue altogether. But thanks to the outrage from Democrats and moderates over the abortion laws in these red states, Shaheen can now stand up against “extremism” is her own right.

“The state of Alabama has just passed a dangerous, draconian anti-abortion law that would prohibit abortion for all women even in cases of rape and incest,” Shaheen says in a Twitter video. “This law is a direct assault on women’s constitutional rights.”

Pro-life Republicans can argue that Shaheen’s position is “dangerous and draconian” as well, but as Alexandra DeSanctis, who covers the life issue extensively for National Review magazine notes, it won’t have the same impact.

“As a matter of optics, the Alabama law makes pro-lifers look way outside the mainstream,” DeSanctis tells NHJournal.  “Yes, the other side is too. But the difference is that the media are going to talk about Alabama’s ‘extremism,’ but when the extremism of New York or Virginia is in the news, they cover that as ‘Republicans pounce.'”

New Hampshire was already trending ever-more blue.  On social issues in particular, the state is left of center.  If the debate comes down to “Republicans want to ban all abortions and Democrats don’t,” that’s an undisputed win for Jeanne Shaheen.