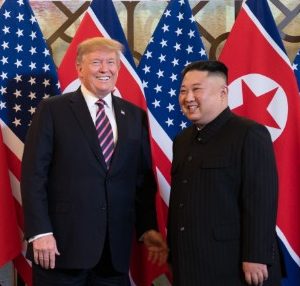 Biden Versus Trump on Korea, North and South

SEOUL — Joe Biden’s election as president of the U.S. opens a strange, uncertain chapter in America’s relations with the rest of the world.

He’ll be repairing some of the damage done by Donald Trump; placating wounded sensitivities from Europe to the Middle East to Asia; opting for multilateral diplomacy; and assuring allies that the U.S. really means to keep its word and live up to treaty obligations.

Nowhere is the challenge greater than with Korea, both Koreas, North and South.

From now until Biden’s inauguration on January 20, there’s no telling what Trump might do to cement his relationship with his friend in Pyongyang, Kim Jong-un, while displaying contempt for South Korea’s President Moon Jae-in.

Nor is there much certainty as to the evolution of Biden’s policy toward North Korea other than the sense that he’ll rely on negotiators with experience from the presidency of Barack Obama.

Biden, as vice president during that period, knows them and should have a realistic view of the difficulties of dealing with the North Koreans.

Trump dearly hopes to show the wisdom of his personal top-down approach in three meetings with Kim.

He can always point to the statement they signed in Singapore on June 12, 2018, in which they promised to work toward a “nuclear-free Korean peninsula,” and he’ll go on claiming to have avoided a second Korean War by persuading Kim to suspend testing nukes and missiles.

The fact that Kim did not begin to give up his nuclear program leaves the way clear for Biden to show that he can finally come up with the magic formula for bringing him to terms.

Biden’s approach, however, does not mean that he will do much better considering the failure of the “strategic patience” of the Obama administration. Watchful waiting was no more successful than Trump’s flashy headline-grabbing antics.

In the weeks before he has to vacate the White House, Trump could shock Korea as he did Afghanistan and Iraq by ordering American troops out of South Korea.

The rationale for acting without consulting the Pentagon would be the refusal of South Korea to yield to his demand for a vast increase in payment for U.S. defense of the South.

Before reaching that decision, Trump would still hope to bully South Korea into a deal. His demand for $5 billion, up from $927 million last year, was an outrageous bargaining ploy, but he insists the South has to pay several hundred million more dollars.

We may be reasonably confident that Biden will want to see renewal of the bases agreement with a minimum of acrimony, but it’s not clear how strongly he’ll stand up to North Korea’s demands.

He will have at his beck and call a pool of think-tank experts and former State Department people who once were immersed in talks with the North.

Don’t count, though, on real wisdom pouring from eager ex-diplomats hankering to get in the game again.

One of them, Christopher Hill, thought he had a deal in talks with North Korea’s Kim Kye-gwan, but the North did not begin to give up its nukes.

Judging from his past record, Biden may want to ease tensions with China despite China’s claim to the South China Sea, threats against Taiwan and never-ending clashes with India along their Himalayan frontier.

Trump is no tough guy either.

After the Singapore summit, he readily ordered a halt to the joint military exercises conducted annually by South Korean and U.S. troops, and he did not appear concerned by the numerous tests of short and mid-range missiles ordered by Kim before and after their three meetings, including Singapore, then Hanoi and at the Demilitarized Zone between the two Koreas.

Now, in his desperation to show he’s still the boss, Trump remains unpredictable.

Kim would love to persuade sweet Joe Biden to go along with a “peace declaration” formally ending the Korean War. That would only be a ruse to bring about withdrawal of American troops.

In the end, Kim would hope to twist Biden around his little finger as he did with Trump.