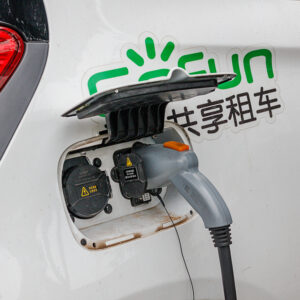 An electric car charging station in Yangshuo, China.
[IS] Opinions

The Biden administration wants half of all new vehicles sold in the United States by 2030 to be either electric or carbon-free. In doing so, it is handing China a major economic and strategic victory over the West that will resound for decades.

China has set itself up as the leader in the worldwide advance toward electric vehicles (EVs), and much of the world is falling in line. China is poised to reap a bonanza by being the dominant producer of the type of batteries and electric motors used to power EVs, in part by controlling large amounts of the raw materials necessary for them such as lithium and cobalt, along with the so-called rare earth minerals that are essential elements to the batteries. China is also leading in the technology used in the manufacturing and operation of these vehicles.

In advance of signing an executive order earlier this month, the White House released a fact sheet stating its goal is to “lead on electric vehicles around the world, and save American consumers money…positioning America to drive the electric vehicle future forward, outcompete China, and tackle the climate crisis.”

The administration claims the executive order “also kicks off development of long-term fuel efficiency and emissions standards to save consumers money, cut pollution, boost public health, advance environmental justice, and tackle the climate crisis.” In other words, this is meant to be a large down payment on the Green New Deal without having to utter the phrase.

This comes as no surprise. During President Joe Biden’s second week in office, General Motors announced its plans to “eliminate gasoline and diesel cars from its fleet by 2035 and embrace electric cars,” according to The New York Times, which added that this “follows a road map successfully drawn by Beijing. To get there, GM — the Detroit stalwart and symbol of American industrial might — may have no choice but to embrace car and battery technologies in which Chinese companies play leading roles.”

A 2011 report from the U.S. Geological Society foreshadowed this day: “China’s dominant position as the producer of over 95 percent of the world output of rare-earth minerals and rapid increases in the consumption of rare earths owing to the emergence of new clean-energy and defense-related technologies, combined with China’s decisions to restrict exports of rare earths, have resulted in heightened concerns about the future availability of rare earths. As a result, industrial countries such as Japan, the United States, and countries of the European Union face tighter supplies and higher prices for rare earths.”

Not only does China control these minerals, but they are by far the largest market for cars in the world today, exceeding the combined total of cars purchased in the U.S. and Japan, according to The New York Times. It also dominates in the manufacturing of EVs and has struck joint venture deals with a number of leading automakers.

Yet its EV industry is not really about clean energy in any meaningful way. In March, an article from the Yale School of the Environment pointed out, “Coal remains at the heart of China’s flourishing economy. In 2019, 58 percent of the country’s total energy consumption came from coal, which helps explain why China accounts for 28 percent of all global CO2 emissions. And China continues to build coal-fired power plants at a rate that outpaces the rest of the world combined.”

But China’s President Xi Jinping pledged to make the country “carbon neutral” by 2060. So apparently they do have a plan.

The Times says, “China is the leading maker of big battery packs for electric cars, producing considerably more than the rest of the world combined. Chinese regulations required until a year ago the use of Chinese battery suppliers, instead of their mostly Japanese and South Korean rivals, for electric cars sold with Chinese subsidies. That forced multinationals to place huge orders with CATL, the main Chinese producer.”

Still, the Biden administration is pushing ahead with subsidies for EV buyers and $7.5 billion to build more EV charging stations, despite the fact that there are just 2 million fully electric vehicles registered in the entire country.

The big winner in this latest Biden initiative is clearly China. The U.S. becomes further dependent on China for a supply chain of critical minerals, technology, and commerce.

Roger Aronoff is a documentary filmmaker and a former Editor of Accuracy in Media. He wrote this for InsideSources.