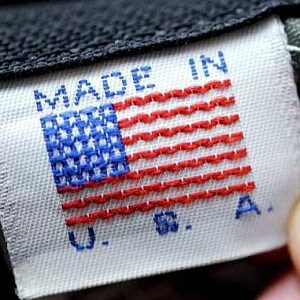 Biden’s New “Buy American” Rules Could Be a Game-Changer for U.S. Industry

As the United States digs out of the COVID-19 recession, President Joe Biden is taking an important step to boost domestic job creation. His administration has announced new rules that will increase the American-made content of goods purchased by the federal government. This comes at a crucial time, since Washington is currently doling out stimulus money to address the pandemic.

Biden’s move will undoubtedly enjoy popular support. Americans have already made clear that they don’t want to buy products made in China—and 80 percent of consumers say they’re willing to pay more if companies close their China factories. In fact, a recent Reuters poll found 63 percent of Americans want the federal government to buy American-made products whenever possible.

The American people have a good instinct for what will help the nation—and it’s good to see Washington following suit. But buying American-made isn’t just a “home team” issue. There are also good reasons to support stronger domestic procurement rules at all levels of government.

Last fall, the Coalition for a Prosperous America (CPA) reported strict “Buy American” rules can increase job creation and GDP growth by 33 percent. Considering the $1.2 trillion infrastructure package currently being considered in Congress, that equates to potentially millions of new jobs throughout the nation.

The Biden administration has previously announced similar rules for federal agencies. So, why should such a sweeping new directive be necessary?

For starters, Washington has been historically lax about enforcing Buy American laws. And existing loopholes often allow federal agencies to source imported supplies in order to save time.

The major problem, though, is China’s ongoing subsidization of its state-owned factories—including billions of dollars annually for everything from steel and electronics to solar panels and electric vehicles (EVs). This has helped China to become the world’s primary supplier for key industrial commodities—and also driven many of America’s high-tech producers out of business. Overall, the United States has lost an estimated 3.7 million good jobs to China over the past 20 years. And Beijing has become the world’s top supplier for many of the components needed to make infrastructure investment possible.

There are major benefits to boosting domestic manufacturing—not least the need to reduce dependence on supply chains from China. The import shortages that occurred at the onset of the COVID-19 pandemic demonstrated just how precarious this import dependency has become. As just one example, the United States now relies on China for 90 percent of the ingredients needed to make generic antibiotics that treat life-threatening infections.

It’s not just pharmaceuticals, however. Beijing has invested roughly $120 billion in an effort to dominate the global semiconductor industry. That could eventually endanger U.S. national security—if China-made computer chips find their way into sensitive applications and military hardware.

Helpfully, the Biden administration’s proposed changes to Buy American rules could provide a significant boost for emerging industries like electric vehicles. Under the new rules, the threshold for American-made content in goods purchased by the government would rise to 60 percent—5 percent above existing standards. Further increases would be phased in—aiming toward 75 percent domestic content by the end of the decade.

America’s new electric vehicle manufacturers could benefit from such an effort, especially since President Biden is hoping to convert the entire federal vehicle fleet to American-made EVs. However, China is on track to have 107 lithium-ion battery mega-factories, with the U.S. having only nine such factories in the planning stages.

It’s not just vehicles, though. The federal government spends roughly $600 billion annually on procurement—and is the single largest purchaser of consumer goods in the world. Directing that taxpayer money to American-made goods could provide a tremendous boost for U.S. manufacturers.

Clearly, the United States has a long way to go. But using the full resources of the federal government to support America’s burgeoning EV industry and lithium-ion battery production is a necessity. Robust Buy American rules that focus on key growth industries can provide an important reset. By putting the full weight of the federal government into long-term support for American industry, domestic manufacturers will finally find the breathing room needed to compete successfully with China. And so, Washington must make robust Buy American rules a top priority.