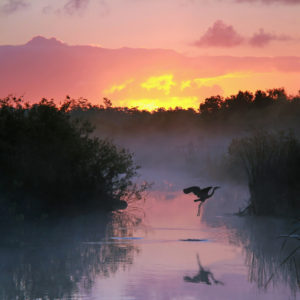 Big Sugar’s Assault on the Everglades

Some Americans are aware that the federal sugar program makes their food cost more. But few know this same program is causing environmental wreckage in Florida that their tax dollars will have to pay for.

The sugar program, known to its many critics as the “sugar racket,” is a tangle of price supports, which increase the cost of sugar in the U.S., and tariffs and quotas on imported sugar, which keeps cheaper sugar from reaching our market.

“There’s probably no better example in U.S. history of a case of both legal plunder and crony capitalism that has been tolerated for so many years, and that has picked more money from the pockets of Americans,” than the sugar program, says American Enterprise Institute economist Mark J. Perry, who has shown that “American consumers and domestic sugar-using industries have been forced to pay twice the world price of sugar for many generations.”

But it’s a great deal for the three Florida companies that produce nearly half of the country’s sugar supply: U.S. Sugar, the Sugar Cane Growers Cooperative of Florida, and the Fanjul Corp., which has helped fund Sen. Marco Rubio’s political career, obliging him to support government subsidies he should philosophically oppose.

Beyond the economic harm done by the sugar program is the environmental damage to Everglades National Park, a 1.5 million acre wetlands preserve located near Florida’s southern edge. According to the National Park Service, the Everglades are a World Heritage Site, a Biosphere Reserve, and a Wetland of International Significance. It is also the “largest subtropical wilderness in the United States,” the “predominant water recharge area for all of South Florida,” and home, as well, to almost 750 species of mammals, birds, reptiles and fish. In short, it’s a natural treasure.

As it turns out, federal policy has provided Big Sugar with a strong financial incentive to foul this wilderness.

“Subsidies are also thought to induce the excessive use of fertilizers and pesticides, which can cause water contamination problems. Sugar cane production has expanded in Florida because of the federal sugar program…and the phosphorous in fertilizers used by growers causes damage to the Everglades.”

An effort to protect this sensitive region was initiated in 2000 through the Water Resource Development Act, which authorized the Comprehensive Everglades Restoration Plan. Part of the restoration included construction of a reservoir that would hold Lake Okeechobee runoff.  The objective was to stop the flow of those harmful agricultural nutrients into the Everglades, Florida’s rivers and eventually its beaches.

But critics say that the sugar industry has been a less-than-cooperative partner in the restoration effort.

“Since the 1990s,” The New Tropic reported last summer, “Big Sugar has been able to fend off state water clean-up requirements and routinely leave us, the taxpayers, to pick up the bill for Everglades restoration efforts.”

Big Sugar is certainly big, but its lobbying influence exceeds its weight class, as its successful obstruction of the Everglades plan shows.

Maybe this is because the “OPEC of sugar” funds its strong-arm lobbying efforts with the hefty profits it generates with the assistance of government policy. And with the price of sugar in the U.S. often twice as high as the global price, those profits are abundant – causing American consumers to pay an extra $1.4 billion for sugar in fiscal 2013, according to research from Heritage Foundation policy analyst Bryan Riley.

It would be well-deserved justice if Big Sugar was made to pay a substantial portion of the Everglades’ restoration costs. Why not? The reservoir alone, which moved a small step closer to reality this spring when state lawmakers approved a measure to secure at least some of the needed land, will cost an estimated $1.5 billion to $2.4 billion.

Not often do free-market advocates and environmental activists become allies. But they can find common ground on this issue. A strong coalition advancing from both sides would be a potent political force for ending the sugar racket.