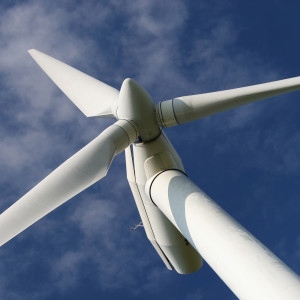 Wind energy development in the United States has slumped.

Despite record installations in 2012, and eking out a 1-year, $12 billion extension of the wind production tax credit (PTC), new wind capacity last year fell to just 1,087 megawatts, a level not seen in more than a decade. Development in 2014 is showing signs of improvement but the year may not fare much better.

The industry blames Congress and the uncertainty surrounding the PTC for the slowdown, but such thinking is overly simplistic and ignores the fundamental challenges facing big wind. This slump, like others that plagued wind development in prior years, can be traced directly to generous government assistance, current energy prices, and the inherent limitations of wind power.

Reasons for the slowdown

The Section 1603 cash grants enacted under ARRA fueled a wind bubble as developers raced to build and qualify their sites. By the end of 2012, the industry’s project pipeline was exhausted with just 43 MW of wind under development in two states. The surge in new capacity created a glut in RPS-qualified generation and eroded demand for wind as states met and/or exceeded their renewable mandates. The shale gas boom further hampered growth by driving down energy prices and harming wind’s economic competitiveness against cheaper, more reliable fuels.

Proponents insist wind energy is a few short years away from thriving without government assistance, but the trends do not support the claim.

For wind to go it alone, average wind capacity factors need to increase dramatically and/or project construction costs must drop dramatically. But that’s not happening according to the U.S. Department of Energy’s (DOE) Wind Technologies Market Report 2013, just released.

The authors, Ryan Wiser and Mark Bolinger from the Lawrence Berkeley National Laboratory (LBNL), report that average capacity factors for projects built after 2005 have been stagnant despite advances in turbine technology. The interior region of the country covering Texas and the plains states continues to show the best capacity factors (36-38%) and lowest project costs ($/kw) but it’s also the most remote. A smaller population means miles of expensive new transmission is needed to transport the energy to higher demand centers east and west.

Turbine prices and project costs may have declined somewhat from 2012, but with only 11 projects in LBNL’s 2013 sample, drawing a firm conclusion about construction costs is premature. The same applies for average wind pricing. According to the report, the national average price for wind dropped to a surprising $25/MWh in 2013, but again, the small sample of power purchase agreements examined was skewed by projects sited in the lowest-priced interior region of the country.

We agree that wind PPAs from 2012-13 have seen some decline in prices but nowhere near $25/MWh in most areas of the country and not for the reasons cited. Wind power is not more competitive. Rather, its pricing in the U.S. is under severe pressure because of the shale gas boom and the accumulation of new wind capacity concentrated in just twelve states, which has lowered demand.

Also, by constructing tens of thousands of megawatts of generation that produces largely off peak, wind developers actually hurt their own energy sales by driving down wholesale prices, which makes the PTC even more critical.

The PTC offsets the high price of wind energy, giving the false impression that wind is competitive with other resources, but at 2.3¢/kWh, the subsidy’s pre-tax value (3.5¢/kWh) equals, or exceeds the wholesale price of power in much of the country! The tax credit provides a significant out-of-market revenue source for developers by shifting costs to taxpayers at large. At current energy prices, we’re not convinced wind power can demonstrate sustained growth without the PTC, and this is confirmed in EIA’s latest Annual Energy Outlook 2014.

According to EIA, if the expired PTC is allowed to stay expired, their models show an expected stair-step increase in wind capacity by 2015 that flattens out for the next decade until gas prices rise and technology improvements make wind more competitive (see chart). If the PTC and the 30% ITC were made permanent EIA shows it would drive more renewables, particularly wind and solar, but at a significant cost: $4.5 billion/year from 2014 to 2040.

Big wind grew up on the tax credit, developed market plans and forecasts that relied on it, and now the wind PTC appears to be a required component of the industry’s economics. That was never the intent of Congress when this temporary tax credit was enacted 24 years ago. The PTC and ITC are now expired and we can expect roughly 15,000 MW of new wind to be built in response to the 1-year extension passed in 2013. After that, it’s over. It’s now time for taxpayers to consider better ways to spend their money. 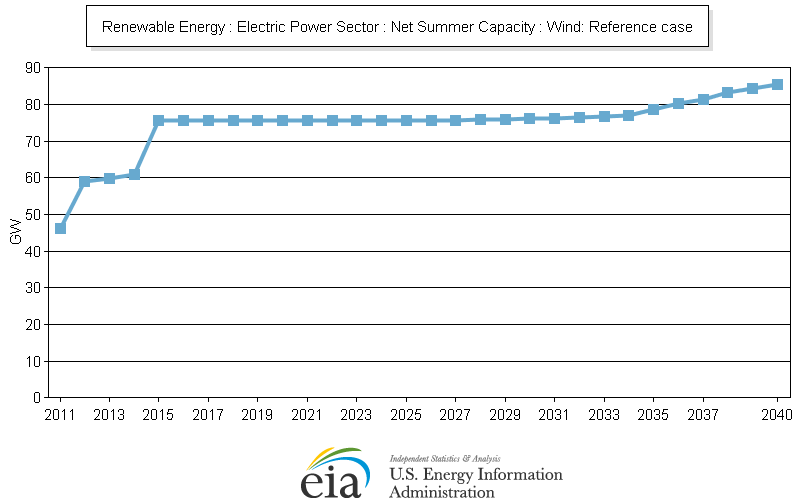 Lisa Linowes serves as the Executive Director and spokesperson for The WindAction Group, a national advocacy focused on the impact/benefits analysis and policy issues associated with industrial wind energy development.