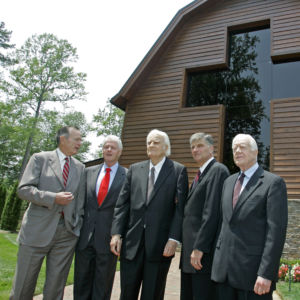 Much has already been said in tribute to Billy Graham, the renowned preacher and public evangelist who recently passed away at the age of 99. Much more is still likely to be said. In the midst of all this, we should not forget that among the many aspects of his legacy is the very fact that he chose to make his faith a public faith, proclaiming it clearly, boldly and visibly. This was a hallmark of his rallies and how he lived, and America was better off for it.

A striking illustration of the amazing effect of Graham’s public rallies is the life of Louis Zamperini, whose story is featured in the bestseller book “Unbroken” and the blockbuster movie by the same name.

A star athlete who ran in the 1936 Olympics, Zamperini returned from Germany only to turn around and enter the Army Air Corps a few years later during World War II. Serving in the Pacific theater as a B-24 bombardier, Zamperini was aboard a plane that crashed during a search-and-rescue mission. One of three survivors among the crew of 11, he was adrift on a life raft for 47 days before washing ashore in the Marshall Islands — only to be taken as a prisoner of war by Japanese forces.

He then embarked on a torturous odyssey while being transferred from camp to camp, eventually being moved to a prison camp on mainland Japan. During all this time, Zamperini continued to waste away and suffer brutal treatment at the hands of his Japanese captors — including a notorious one nicknamed “The Bird.”

After the war, Zamperini returned home, got married, tried to carry on with life. He was a celebrity to many Americans, and busy going on speaking tours and being treated as a war hero. Yet inside, he was falling apart.

Even after surviving his wartime saga, despite the incredible odds against him, carrying on normally back home was impossible. His spiritual health suffered due to the horrors of war. Zamperini was plagued by alcoholism and depression, and he suffered nightmares in which he was strangling “The Bird.”

“Talk about hate. I wanted to kill him,” Zamperini says. One night he woke up strangling his new wife, Cynthia. He was out drinking heavily each evening, and Cynthia was about to get a divorce.

But then, upon a neighbor’s invitation, she attended Billy Graham’s 1949 crusade in Los Angeles held under a tent in a parking lot. She heard Graham clearly and publicly proclaim the gospel, and her life was changed because of it. After choosing to follow Christ, Cynthia decided she didn’t want a divorce, but did want Zamperini to attend the crusade. He angrily stormed out the first night, but returned the second.

Years later, he related the experience:

“(Graham) read the Scriptures. ‘For all have sinned and come short of the glory of God.’ ‘The wages of sin is death but the gift of God is eternal life through Jesus Christ our Lord.’

“Well, I knew I was a sinner but I didn’t like the idea of someone else reminding me. If anyone had ever asked me if I believed that Christ was the Son of God, I would have said yes. My whole life I believed it, but (in) the heart no.

“I knew somehow if I’d believed it in my heart, my life would have been different. So I knew I didn’t possess the Savior but I still didn’t want to do it. I think the best description to that is the Bible says that men prefer darkness rather than light. Here I was preferring my rotten life to the light.

“Then I started having a flashback to the life raft and prison camp, all those thousands and thousands of prayers. ‘God spare my life through the war, and I’ll seek You and serve You.’ I kept thinking I came back from the war alive, and I never even thought about those prayers. I never tried to keep one prayer.”

Zamperini responded by choosing to follow Christ that night. After that, he stopped getting drunk. He didn’t have another nightmare featuring “The Bird.”

Acknowledging that forgiveness can be difficult, he chose to forgive his former tormentors, including “The Bird.” When he returned to Japan to carry the torch at the 1998 Winter Olympics, he offered to meet with “The Bird,” but his former captor refused. Yet Zamperini forgave anyway, and met with other former guards, some of whom accepted Christ.

Through his humble submission to Christ that set him on the path toward forgiveness and healing, Zamperini is a model for all of us. Yet the power of his life would not have been on display in this way had it not been for Billy Graham — publicly proclaiming, clearly and loudly, the Good News of Jesus Christ.

In an era when the value of the public role of religious belief is at times challenged and questioned, Zamperini’s story is a reminder of the incredible good the gospel produces, through the lives of all who would respond to it, throughout the ages.