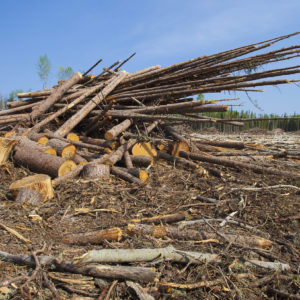 For years, ethanol was going to provide the answer to America’s dependence on foreign oil. According to its proponents, ethanol would allow the U.S. to grow its way out of buying crude from the Middle East, while also helping the country to go green. Significant increases in ethanol production were tied into an energy security and independence act that passed Congress in 2007. After the 2008 economic crisis, however, ethanol plants struggled to survive as consumers drove less and purchased smaller vehicles. Additionally, financing for plant expansion became more expensive. Corn ethanol received the bulk of the attention–and the subsidies–but biomass fuel was also suggested as a means of making fuel without sacrificing food. Today, with gas prices lower than they were 10 years ago, the value of biomass ethanol is coming into question.

“The biomass power industry portrays their facilities as ‘clean,’ said Mary Booth, Director of the Partnership for Policy Integrity and author of a recent report on biomass. “But we found that even the newest biomass plants are allowed to pollute more than modern coal- and gas-fired plants, and that pollution from bioenergy is increasingly unregulated.”

For many states, biomass is considered a renewable energy fuel. The trouble is, biomass means burning wood under another name. Biomass or woody biomass, as it is sometimes called, refers to the burning of wood pellets, chips, and other scraps of organic material in order to power steam turbines. Biomass and biofuels, such as ethanol and biodiesel, accounted for almost half of U.S. renewable production in 2016. Production is centered in the south, which manufactures 9.3 million tons of biomass fuel annually.

Despite the availability of low-cost natural gas for generators, the biomass used for electricity generation has remained relatively steady for the past decade. That statistic is somewhat misleading, since it fails to account for the growth that has occurred in almost every other fuel source over the same period. Compared to these fuel sources, biomass is on the decline. This has state legislatures in the northeast, particularly Maine and Massachusetts, wrestling with the decision of whether to subsidize biomass to protect jobs, or to allow plants to close.

Supporters of biomass argue that the fuel encourages planting trees, which helps to offset the carbon released when the pellets are burned. However, opponents point out that the fuel relies heavily on subsidies to remain competitive and produces many harmful particulates when burned.

“Bioenergy will always have a role in Maine where facilities burn forest product manufacturing wastes onsite for heat and power, thus also avoiding disposal costs,” says the Partnership for Policy Integrity in a recent report on the state’s bioenergy programs. “However, continued support for low-efficiency wood-burning power plants will prolong the financial bleeding and subsidy dependence by supporting the lowest value use of wood, which is burning it.”

In Maine, bioenergy generation costs about $90 per MWh to generate. Meanwhile, wholesale electricity prices in New England average between $20 and $50 per MWh. As a result, the industry is unsustainable absent significant subsidies.

Maine has invested heavily in biomass, which helps to support the state’s logging industry. Since 2008, the state has paid more than $68 million in Ratepayer-funded Renewable Energy Credits to aging biomass plants. The industry has also benefited from federal grant monies, such as the Biomass Crop Assistance Program, which subsidizes farmers who grow energy crops. This program paid out some $35.6 million to lumber producers in Maine over the course of three years, more than was paid to any other state. Maine also received grants through federal programs to promote rural energy development and bioenergy.

“Maine should be investing in the emerging and booming clean energy economy instead of irresponsibly giving away taxpayer and ratepayer dollars to prop up the failing and polluting biomass industry,” said Glen Brand, Sierra Club Maine Chapter Director. “This report also reveals the hypocrisy of Governor [Paul] LePage and others who support direct biomass subsidies while denouncing net-positive investments in solar, wind and efficiency.”

In addition, the state government considers biomass to be part of its renewable portfolio standard, as do Connecticut and Massachusetts. It is estimated that these out-of-state subsidies add an additional $60 million in revenues for the biofuel industry. In the case of Massachusetts, these monies are tied to rigorous air quality standards that many plants in Maine cannot achieve. Some of the plants have been grandfathered in, but any move to enact more stringent air quality standards threatens jobs in Maine.

Last year, when certain Massachusetts subsidies ended, Maine’s state government stepped in to bail out the industry, pledging $13.4 million to bridge the gap between operating costs and market prices for electricity. The measure was pitched as a job-saving measure. As a result, two companies, New York-based ReEnergy, and Stored Solar, pledged to retain 87 jobs. Taxpayers who did the math could see that this worked out to $77,000 per job saved.

These jobs come at an environmental cost as well as an economic one. Burning wood releases not only carbon dioxide, but fine particulates that can lodge in the lungs, aggravating asthma, as well as heart and lung disease. In New England, burning wood, including biomass, is the leading source of these fine particles.

The delicate biofuel house of cards is under consideration again in Massachusetts. Governor Charlie Baker has pushed to designate the fuel as a renewable energy source, giving it continued access to state subsidies. Environmental groups are resisting the effort, arguing that rather than reducing carbon emissions, adding additional biofuels to the mix would increase soot.

Administration officials, however, have been arguing that the fuel source is less subject to price fluctuations than fossil fuels.