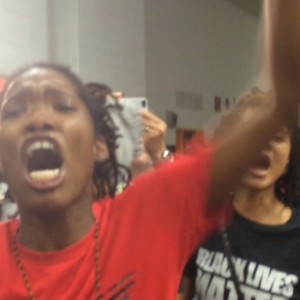 Seema Sadanandan, who recently left the American Civil Liberties Union of the Nation’s Capital to join the Alliance for Safety and Justice, said last Thursday that she’s working on an article making this case for the University of the District of Columbia Law Review.

Sadanandan previewed that piece during UDC’s daylong symposium, “From Protest Movements of the 1960s to #BlackLivesMatter: Legal Strategies for an Emerging Civil Rights Movement.” She told the audience of self-professed “radical” lawyers and activists that her D.C. case study started with a spike in homicides in the nation’s capital last summer.

“We had our mayor introduce one of the most draconian criminal justice proposals that this city has seen in more than a decade if not ever,” she said of Bowser’s bill, which included harsher penalties and warrantless searches of violent ex-offenders.

Activists joined with sympathetic lawyers and members of the faith community to lobby against the legislation. In a particularly dramatic display, Black Lives Matter shouted Bowser down during an August speech unveiling her plan. By the time the mayor’s bill reached her fellow Democrats on the D.C. Council in October, the Washington Post declared it “dead on arrival.”

“It was no small thing,” Sadanandan said, but rather “an incredibly impressive showing of power.”

The even bigger positive outcome, in her view, was “one of the most visionary bills that this country has ever seen — a bill that I believe is starting to catch fire.” She was referencing controversial Council legislation that would literally pay criminals to stop committing crimes.

Unbelievable as that might sound, Post columnist Petula Dvorak explained in February, the idea is to “handpick about 50 of the city’s most violent, likely-to-regress young offenders and pay them about $9,000 annually to be good.” The initiative is modeled on an existing law in Richmond, California, credited with reducing city gun violence dramatically.

One of its defenders is Barry Krisberg, a criminologist at the University of California-Berkeley. “Punishment might get you to stop a practice, but that doesn’t persist,” he told The Washington Times. “If you want behavior to persist over time, rewards are the way to do it.”

Not everyone in the District is convinced, however. Tim Lynch of the libertarian Cato Institute told the Daily Caller that the “pay for peace” initiative is “frankly an awful idea, and I think the policymakers have things backwards. If they have any money, I think it should be spent at the other end of the spectrum, for people who are getting out of prison, and that is where the government tends to be very stingy.”

Bowser also opposes the plan. Though she didn’t mention it explicitly in her recent State of the District address, one line of the speech seemed to convey her view.

The mayor’s office didn’t respond to a request for comment on this article.