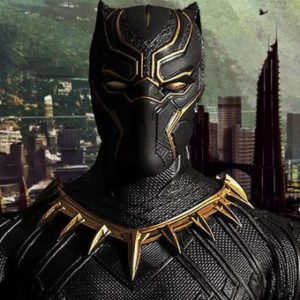 After only 24 days, the actors, directors and producers of the movie “Black Panther” can officially utter the B-phrase.

As in “billion-dollar buzz.”

It seems fitting that China vaulted “Black Panther” over the $1-billion global milestone at the box office during the weekend. China boasts the second-largest movie market in the world, according to Forbes magazine, as “Black Panther” showed the monetary power of diversity.

And the film devoured blockbuster stereotypes on several fronts along the way:

Now, let’s go to the movies. Bring the buttered popcorn as we study the stats.

“The hand-writing’s on the wall,” said Hunt, director of the Ralph J. Bunche Center for African American Studies at UCLA. “People of color are already 40 percent of the population. Their (movie-going) share is increasing about a half a percent per year. And last year they bought more than half the tickets for half of the top 10 films. So clearly, the market power is there.”

Yes, “Black Panther” is showing what’s possible: With $561 million in 24 days, the movie garnered the third-biggest domestic 24-day total behind only “The Last Jedi” ($572 million) and “The Force Awakens” ($812 million), according to Forbes, and it is only the 33rd movie in history to garner $1 billion in global gross revenue. A stratospheric financial return for a movie that cost $200 million.

Before “Black Panther,” there was “Get Out.”

Said Obst, “Additionally, let’s discuss ‘Get Out’ first because ‘Black Panther’ is such a gigantic deal. ‘Get Out’ is probably the industry’s favorite movie this year. First of all, it reinvented a genre. It is a horror satire that gave the point of view of African-Americans in the suburbs in a way that I think I’ll probably never experience the suburbs where I grew up.”

Let’s examine the game of repetition. There is a belief in pro sports, especially after its own annual blockbuster called the Super Bowl, that the other 31 NFL teams will copy the winner of the Big Game in terms of playing style and business model during the following season.

We know the adage: Imitation is the sincerest form of flattery. Or, more plainly, success breeds a whole bunch of copycats.

Obst says the movie industry is no different.

As she said, “There are probably 10 more ‘Get Outs’ being created right now, in one way or another. It took an actor that nobody knew and turned him into a movie star and showed that you could make a movie for a price; you could open it, and it could become a domestic hit, with a director you didn’t know and a star you didn’t know, and it didn’t matter.”

Obst, of course, was referring to actor Daniel Kaluuya and director Jordan Peele, who won an Academy Award for best original screenplay. Built on only a $5 million budget, “Get Out” grossed $255 million worldwide.

Key statistic No. 3: Stereotyping can result in a billion-dollar loss.

All of this leads us back to the “Black Panther” in the room. What if Disney had adopted the old stereotypes that black folk don’t make good superheroes in the thespian craft? Especially those in costume tights.

Then, “Black Panther” star Chadwick Boseman and director Ryan Coogler wouldn’t have attained blockbuster status. And Disney would have lost out on another billion dollars.

With that, for all today’s talk that black-oriented movies and actors/actresses cannot consistently sell across a broad spectrum internationally, well … NFL-star-turned-action-movie-actor Fred Williamson debunked that outlier/unicorn inference two decades ago.

During the 1998 National Association of Black Journalists Convention, held in Washington, Williamson articulated his popularity in western Europe. Speaking on a panel discussion focusing on black movie stars from the 1970s, such as Williamson and fellow panel member Richard Roundtree (remember “Shaft”), Williamson said, “When they say we (black actors) can’t make it in foreign countries, don’t believe it.”

Suffice to say, Williamson’s declaration was 20 years ahead of its time.

So, finally in the blockbuster category, those red-light signs that leading black actors have confronted in the past may turn green more often at future intersections of doubt.