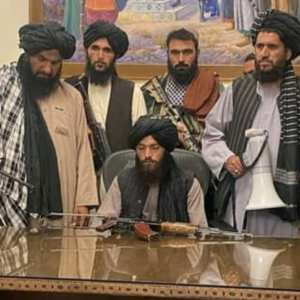 Blame the Taliban for Afghanistan, Not Biden or Trump

As the world watches Afghanistan disintegrate under Taliban control, the professional chattering classes in the media and politics are determined to lay blame. According to the news, the fault lies with either President Joe Biden or some on the left who prefer to blame former President Donald Trump.

But that’s nonsense. The Taliban is to blame for the horrors taking place in Afghanistan.

If you want to pick an American president to blame, maybe it’s former President George W. Bush. He got us into the war and diverted our military’s attention toward Iraq, away from Afghanistan, before the Taliban was crushed and Osama bin Laden was dead. But Bush left the White House in 2009.

Sure, maybe it was a mistake for Trump to negotiate a deal with the Taliban that allowed them to regroup and plan for the takeover after our exit. Or, yeah, Biden could have taken more steps to ensure the safe evacuation of our Afghan allies – like those brave translators – who face death at the hands of the Taliban for working with America.

But how could anyone actually think a retreat from an enemy like the Taliban was ever going to be organized, efficient, and smooth?

You don’t need to be a military expert to realize the only thing that prevented the Taliban from taking over the entire nation was the presence of the American military. And, once we left, that the country would again fall into the hands of the Taliban. Everyone in Afghanistan understood this dynamic which is why the Afghan National Army was so quick to dissolve rather than fight.

Those saying that Biden has blood on his hands for abandoning the Afghan people are ignoring key facts. Could the evacuation have gone better? Of course. Biden owns that. But the U.S. spent a trillion dollars and gave the lives of thousands of our warriors to secure freedom for Afghanistan from radical religious tyranny. How many more men and women in our armed forces should we sacrifice? Especially when it seems a large percentage of Afghans don’t even want freedom from the Taliban.

To the pundits who say if we just spent a few more months there securing Kabul, and ensuring an orderly evacuation, they should consider if the Taliban would have gone along with that proposition. If not, just a few more months could have meant U.S. military engagement and maybe more American lives lost. Also, would it be better if the Taliban had fought their way to Kabul? The result would still be a Taliban victory but with more bloodshed.

As for the Americans who gave their lives in Afghanistan, this is what pains me most. But to the families and friends of those who perished, I say this: Dying for a lost cause is not dying for nothing. It’s wrong to think of it that way, and the world owes them a debt of gratitude for their service to America and humanity. Perhaps one day someone in Afghanistan will lead that nation to freedom, inspired by the U.S. commitment.

Lastly, placing the blame on Biden or Trump for the current situation in Afghanistan – and not the Taliban – risks engaging in faulty and arrogant thinking that America is all-powerful and can solve all the world’s ills. We cannot. All we can do now is pray for Afghanistan, and thank and console those Americans whose friends or family members were killed or wounded in our country’s longest war.