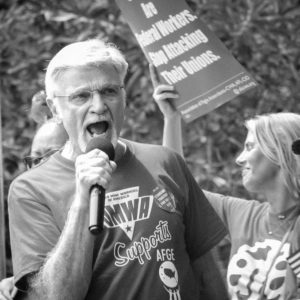 The Bureau of Labor Statistics just released its new data on union membership. Union leaders should be aghast.

The unions’ market share in private-sector employment has declined since 1983 (the first year the BLS began systematically to collect union-related data). In 2019 the membership rate was down to 6.2 percent. Inasmuch as the estimated rate in the 1950s was in the mid-30 percent range, the decline is even more startling.

This is not hard to understand. The only economically coherent argument that supports the unions’ claim that they are able systematically to increase real wages and salaries for their members is based on what economists call “monopsony.” That is, a given group of workers has one (or a few) employers who are interested in hiring the sort of labor the group of workers wants to sell.

Today buyers’ markets in labor are transitory, not systemic. Private-sector real economic growth constantly increases the number and variety of employers seeking to hire workers. This diminishes the bargaining power of employers, and increases the bargaining power of workers. Unions become increasingly irrelevant.  Economic policies that increase real economic growth do more for workers than any union has ever done or could ever do.

It is conceivable that a progressive/socialist takeover of government in 2021 could destroy the private-sector enough to recreate systemic buyers’ markets in labor. Unions would love it. However, it would not be in the interest of victorious progressives/socialists to wreak that much damage so soon. Short of an unconstitutional coup, they could not cancel scheduled elections in 2022 and 2024.

In 1969 Wisconsin became the first state to permit unions to bargain for its state and local government employees. President Kennedy authorized union bargaining for federal employees by executive order in 1962, and it was codified in the Civil Service Reform Act of 1978. Many other states followed Wisconsin throughout the 1970s, 1980s and early 1990s. The government-sector union membership rate reached its apogee in 1994 at 38.7 percent. In 2019, it fell to 33.6 percent.

Since 1983 the government-union membership rate has always significantly exceeded the corresponding private-sector rate. This is because in government employment there is an “iron triangle” of exchange among politicians, government agency heads, and unions to expand government expenditures.

Politicians seek election and re-election. In exchange for campaign donations of money and effort from the unions, politicians offer to enact legislation that makes it easier for unions to capture dues- and fee-payers. Unions and the agency heads with whom they bargain sit on the same side of the bargaining table.

It is in the interest of agency heads to expand the size and scope of their agencies because this increases their own power, prestige and influence over the economy.

It is in the interest of unions to increase wages and salaries paid to government employees because they can then get more money from dues and fees for which they charge those employees. So, unions and agency heads collude in collective bargaining to pick the pockets of taxpayers. And they do so to the applause of politicians who always seek to spend more and more of other people’s money to increase their power over other people’s lives.

So workers perceive that unions can do more for them in government employment than they can in private employment. This leads to higher union membership rates in the government sector than in the private sector.

In its Janus ruling of June 2018, the U.S. Supreme Court dealt a significant blow to the ability of government-employee unions to maintain membership. The court ordered all government employers to cease and desist from taking money out of government employees’ paychecks at the behest of unions without getting the prior permission of those employees.

Now no government employee — federal, state or local — can be forced to pay a union anything for any purpose, even representation services.

Many government employees may have been union members only because they were forced to pay union fees even if they declined union membership.

Membership gave them at least some voice over union shenanigans for which they had to pay. But now, if they are not voluntary union members, they don’t have to pay the unions anything. This has already caused many government employees to resign union membership.

Even if the progressives take over the White House and Congress in 2021, they will not be able to reverse Janus. It was a constitutional ruling. Only a constitutional amendment can overrule it.

Moreover, there is at least one new case making its way to the Supreme Court that may result in a ruling that abolishes the grotesque privilege government unions now enjoy called “exclusive representation” (ER). Under ER, a union certified by a government labor board becomes the “exclusive bargaining agent” for all the employees of that agency.  Non-members are coerced into accepting that union as their exclusive bargaining representative. Individual non-members are even forbidden to represent themselves.

Exclusive representation exists in the private sector as well, but that raises separate issues.

If the court declares ER in the government sector to be unconstitutional, the decline of the government-sector union membership rate will accelerate. It will always be higher than the private-sector rate because of the iron triangle, but it will fall.

Economists are notoriously bad forecasters, so I could be wrong. Nevertheless, I forecast a very bleak future for American unions.

Charles W. Baird is professor of economics emeritus at California State University, East Bay. He wrote this for InsideSources.com.