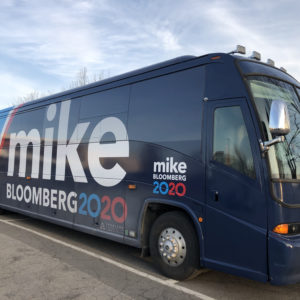 MANCHESTER, N.H. — The confusion at the new Bloomberg campaign office in Manchester on Monday was understandable.

Glen Hooks, an environmental activist and Mike Bloomberg surrogate, had just finishing extolling the former NYC mayor’s climate-change bona fides when he issued his call to action. “I’m asking you guys, over the next eight days as we get ready for the primary, if you haven’t already voted, I hope you’ll vote for Mike.”

Hooks is part of a multi-state bus tour opening offices from Maine to Pennsylvania and can be forgiven a bit of bus lag. (The big, blue “Mike Gets It Done” Express bus was parked outside in the strip mall lot — with its own security detail — right in front of the Heng Won Chinese takeout joint.) That means it’s his job to engage voters on behalf of a candidate who won’t be on the ballot in New Hampshire until November, who has yet to appear on a presidential ballot anywhere in the country, and who is trailing the frontrunner, Sen. Bernie Sanders, by nearly 15 points in national polling.

No wonder people are confused. 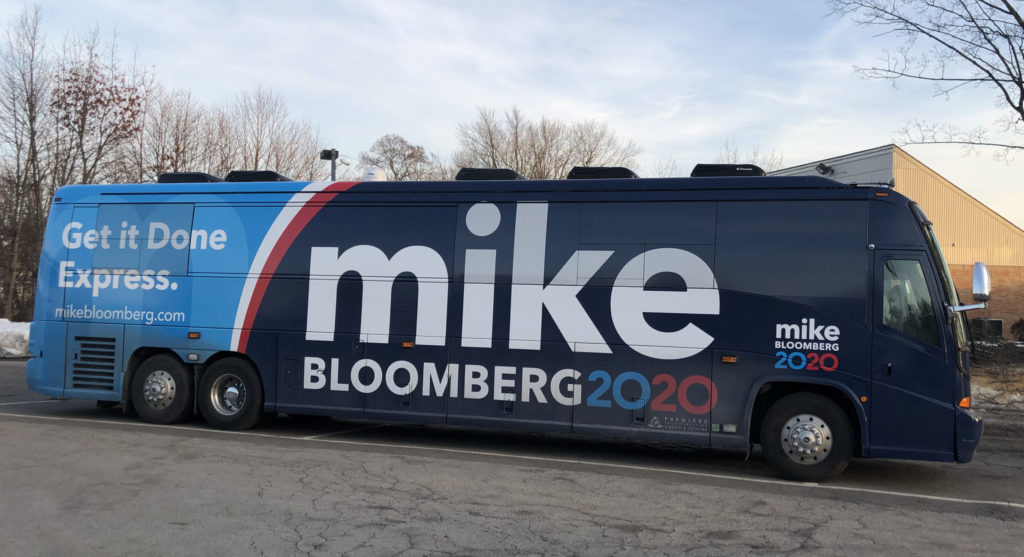 Bloomberg and his national strategists are smart people, so the assumption is they must have a method in their seeming madness. Renting office space, hiring campaign pros like Granite State Democratic strategist Liz Purdy, and plans to hire another dozen or so more — there must be a plan. What is it?

“Mike’s committed to working to support the Democratic nominee whether it’s him or whether it’s somebody else, and supporting the ticket here in New Hampshire,” Bloomberg’s state director Ryan Mahoney said. “This is a state Trump lost by less than 3,000 votes, and we have a competitive governor’s race, U.S. Senate race and congressional races.”

“We’re putting that team together now, and not waiting until July,” Mahoney added. 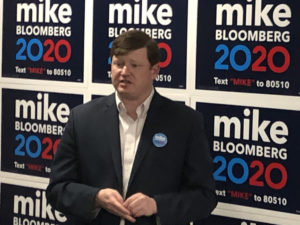 So Bloomberg’s spending money now that could help self-avowed “democratic Socialist” Bernie Sanders carry New Hampshire and the White House? What about his criticisms of Sanders earlier in the day for the Vermont senator’s praise of Fidel Castro?

“We’re very opposed to the authoritarian nature of Cuba but you know, it’s unfair to simply say everything is bad. You know?” Sanders said on CBS’ 60 Minutes.  “When Fidel Castro came into office, you know what he did? He had a massive literacy program.”

“Fidel Castro left a dark legacy of forced labor camps, religious repression, widespread poverty, firing squads, and the murder of thousands of his own people. But sure, Bernie, let’s talk about his literacy program,” Bloomberg responded on Twitter.

Is Bloomberg really going to hand his New Hampshire operation over to a pro-Castro, anti-capitalism candidate like Sanders?

“For most Democrats like me, the most important thing is defeating Donald Trump. And whether it’s Mike Bloomberg or Bernie Sanders, I think Democrats in the fall will come together,” Mahoney told InsideSources.

Several attendees echoed that sentiment. The crowd was small, about twenty people, but they appeared well aware of Bloomberg’s record. Other than one heckler, who attacked Bloomberg for allegations of alleged sexual harassment and who declined to give his name to the press afterward, the gathering was quiet but enthusiastic.

Two women from southern New Hampshire, Rose-Lynn Armstrong and Diane Carpenter, said they stopped by to show their support. “I think he’s effective at enacting policy. I lived in New York and I liked what he did there,” Armstrong said.

“I like what he does in his corporate life, how he runs his company, what he does from a philanthropic view, it all makes sense to me,” Carpenter added.

Several attendees expressed reservations about Bloomberg’s decision to skip the First in the Nation primary and other early contests.

One man, a self-identified independent from Manchester, told InsideSources, “I would have much preferred he actually stood in our primary and in the Iowa caucus, but I understand that he got in late. He’s obviously made a calculated gamble on the later states and we’ll see how it works out.”

“I’m a big proponent of the New Hampshire primary process,” Carpenter said. “By bagging it, if he’s successful it could change the model.”

But where is the model for what Bloomberg is doing: running a general election campaign at the same time he’s running in the primary?

“It’s a bit unique,” Mahoney conceded. “But it’s all about winning in November.”